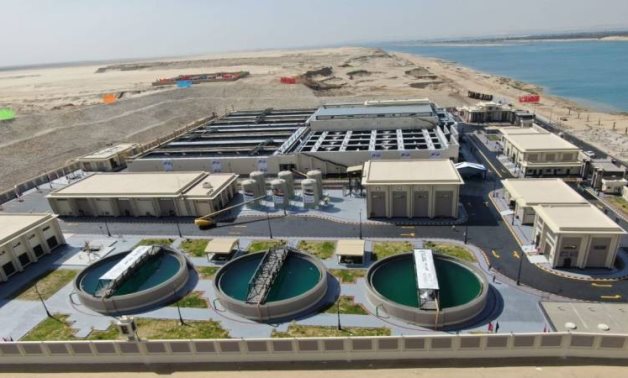 "We’re working to save two billion cubic meters that used to get wasted in the sea. The majority of such water would be used in the reclamation and irrigation of New Delta," Sisi added.

The president also tackled the problem of encroachments over the Nile mainstream and canals underlining how the previously deteriorating conditions of canals were negatively impacting farmers.

President Sisi urged the acceleration of cleaning and lining of canals, warning against encroachments over canals and Nile banks saying “don’t get upset of the consequences.”

The head of state instructed the Egyptian Armed Forces Engineering Authority to immediately eliminate encroachments whenever they appear, saying “you can even deploy 10,000 machinery to do that.”

President Sisi warned that the punishment to individuals, who commit encroachments, would include the withdrawal of any kind of subsidies they get, and that even applies to subsidized bread and staples.

He further added, "encroachments will not just be removed. They will be removed at the expense of” violators.

Egyptian President set a 6-month ultimatum to efface any encroachments on canals and Nile River mainstream so their width would be back to what it was 30 years ago.

The chief of state revealed that another massive wastewater treatment plant will be completed in June 2022 in Hamam District western Egypt in order to reclaim and irrigate 1.5-2 million feddans in New Delta.

President Sisi showcased that terrorism in North Sinai aims for the absence of development in the peninsula. "That’s why forces are deployed there to protect such development works unlike any other spot in the country," he stressed.

Prime Minister Mostafa Madbouli said that Sinai possesses the longest military record in history because of the many encounters that occurred on its land.

The prime minister presented the ongoing development works on the peninsula, and how it is part of Egypt's urbanization plans aimed at raising urban areas from 7 percent of Egypt’s surface area to 14 percent by 2052.

The prime minister noted that Sinai is at the core of the plan as urbanization used to be mainly taking place in Delta and Nile Valley.

"Egypt is currently spending LE700 billion on Sinai development," Madbouli stated pointing that the eastern (Sinai) and western (mainland) banks of the Suez Canal have become connected by both tunnels and floating bridges.

Starting with transportation, the prime minister said that Sinai’s Saint Catherine Airport is being upgraded now as well as the seaports of Nueiba, Eastern Port Said, and others. That is in addition to Taba Urban Port.

Speaking of education and healthcare, PM Madbouli said that the three branches of King Salman University in Sharm El Sheikh, Tor, and Ras Sidr have began operation, while a cancer treatment complex will be launched soon to serve the residents of Sinai.

Regarding housing and utilities, the prime minister highlighted that the electricity sector in Sinai got investments worth LE76 billion, and that new cities are being introduced in the peninsula, including fourth-generation ones.

Also, maintaining the characteristics of the place, Madbouli underscored that the creation of new Bedouin communities in Sinai was a success.

The prime minister concluded that Bahr Al Baqar is not the first of its kind targeted at achieving land reclamation in Sinai but it is the largest. He showcased that Mahsama Wastewater Treatment Plant had been accomplished at LE22 billion as well as Sarabium Siphon carrying Nile water to Sinai.