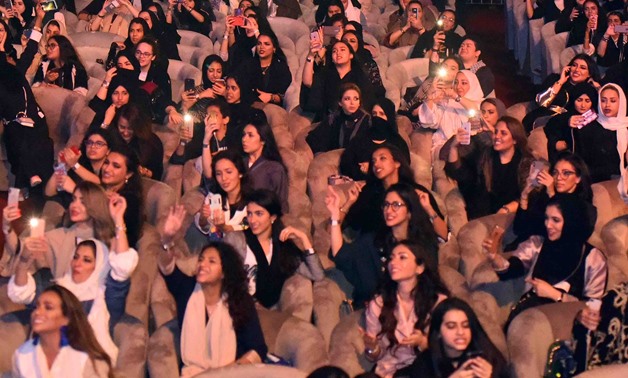 By: Angy Essam
CAIRO – 2 April 2018: The famous Egyptian singer Tamer Hosny performed for the first time a concert in Jeddah city in Saudi Arabia, on Friday, March 30.
The concert witnessed the attendance of thousands of Saudis, about 90 percent of which were women.

At the beginning of his performance, Hosny thanked both the Saudi government and nation for inviting him to perform such a huge concert for the first time. Hosny performed on a massive stage, made especially where all audience seats were either red, white or black; the three colors of Egypt’s flag.

The concert was organised under the auspices of Saudi General Entertainment Authority which stated that Hosny was chosen to perform such a huge concert because of his popularity among all Saudis. This concert comes as part of the cultural openness project adopted by Saudi Crown Prince Mohamed Bin Salman.

Bin Salman has taken plenty of steps to transfer the kingdom, which was famous for its ultra-conservative culture, to a new culturally and socially open country. He has already eased the rules pertaining to the segregation of the sexes.

The Saudi Kingdom gave women the right to start their own businesses without the approval of a male relative. Rules have also been laxed about women walking in public without a male guardian. At the beginning of February, the Shura Council, the advisory body to the monarchy, demanded the country’s sports authority to establish a Saudi agency for women’s sports.

Saudi Minister for Culture and Information Awwad bin Saleh Al Awwad previously announced that he expected the theaters to be opened very soon. The Kingdom of Saudi Arabia started the screening of international children movies on Jan. 17 in Jeddah.

Last December, the Saudi government started to issue licenses for the establishment of cinema halls for the first time in three decades; despite this, lifting the ban has been opposed by powerful religious officials, who say that films can be immoral or “open doors to evil” as per their description. This decision strongly reflects Saudi Arabia’s desire to kick off its cinematic activities.

Saudi media previously announced that “The Emoji” and “Captain Underpants” were the first two movies selected for screening. Riyadh hosted the screening of three other movies: “The Son of Bigfoot”, “Smurfs” and “Paddington 2”.

“The establishment of Saudi cinemas is the first step toward a strong Saudi cinema industry in the coming years,” renowned Saudi actor Mohamed Bakhsh previously said about the decision in an interview with Okaz newspaper.

“We must have a strong cinema base through the establishment of cinema institutes to enhance Saudi artists’ talents, especially since the decision of opening cinema halls needs cinema production, because most of the countries around the world consider cinema as an independent and important industry,” he added.

Bin Salman’s previous decisions were mainly dedicated to ease restrictions on women. Of his most prominent reforms is the lifting of the driving ban on women. Uber in Saudi Arabia is now looking to recruit female drivers. Bin Salman also gave Saudi women the permission to attend the country’s national day last September in Riyadh. Additionally, women in Saudi Arabia were allowed to attend a professional football match for the first time in the country’s history on Jan. 1.

“The Saudi cultural openness era has started and we will continue until we reach the highest standards in the world,” Khatib previously declared. Khatib did not state if women will be allowed to attend the new opera shows or not. He added that the band Maroon 5 and the acrobatics show Cirque du Soleil are some of the 5,000 acts planned for 2018 alone.

Khatib declared this decision while revealing the authority’s entertainment calendar in the Saudi capital Riyadh. He recounted that Saudi Arabia allocated $64 billion to be fully dedicated to the entrainment sector for the next 10 years. This decision means that “The Marriage of Figaro” or the “Barber of Seville” could soon be soaring through the rafters of the new Riyadh opera house. Such an announcement comes as a part of Saudi Arabia’s recent series of cultural openness decisions issued by the Saudi Crown Prince Mohamed Bin Salman.

It is worth mentioning that famed Egyptian actor Ashraf Abdel Baky has started establishing his new artistic project entitled “Saudi Arabia Theater” in Jeddah with the support of the Saudi General Entertainment Authority.