In pics: All you need to know about the ancient craft of fish drying in Hurghada 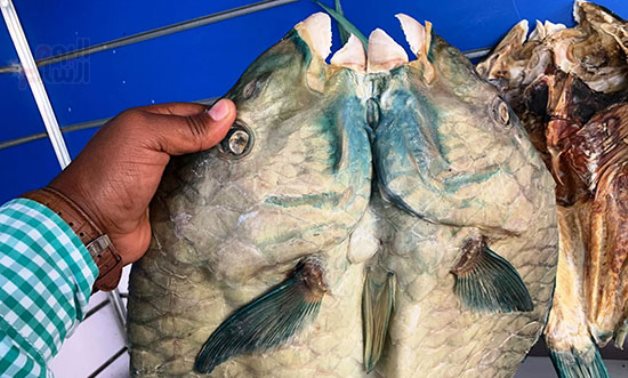 CAIRO – 10 March 2022: If you are a fan of the Red Sea resorts in Egypt, you must have visited Hurghada city at least once, with its mesmerizing beaches, unique diving experiences and distinctive restaurants and cafes in its old town.

However, you might surprised to know that Hurghada, one of the main tourist destinations, is also known for hosting the old craft of drying fish.

Local residents of the Red Sea are known for the craft of drying fish since a long time, as it had a great significance in their lives. They used to dry fish in the past due to the lack of refirgerators and coolers back then, to preserve the fish.

Egypt Today met with Mohamed Mosleh, from the Ababada tribe in Hurghada, who is the only one still working in the craft of drying fish, and selling it in its seasons in the last ten days of the Holy month of Ramadan, which is followed by Eid al-Fitr (The feast of breaking the fast.)

Mohamed Mosleh said that dried fish is one of the crafts that fishermen did in the past when they were going out to fish.

As years passed, dried fish became one of the most important meals or foods eaten by the people of the Red Sea and some governorates of Upper Egypt, especially Qena Governorate, and centers near the Red Sea such as Qift Center. He emphasized that these fish have their own seekers.

Mosleh added that there are different types of fish to dry, including Harit and Raho, and it takes about two months for the fish to be dried, and the fish must be large in size, and it can be preserved for two years.

He continued that the meal of dried or salty fish is one of the important and basic rituals of Eid al-Fitr for the people of the Red Sea cities, especially the cities of Hurghada and Qusayr because they are the basis of the fishing craft in the Red Sea.

He explained the method of drying the fish: “The beginning of the method of salting or drying fish is not suitable for all types of fish, but for specific fish such as Harit and Raho. The drying process is done by choosing the appropriate fish for the drying process, then after that the fish is dissected from the inside and salt is placed in the spaces until it is saturated with salt, and then  cleaning and washing it well with sea water, and exposing it to the sun for one day.

He explained that after being exposed to the sun for a period and the salt mixed with it, it is washed again with sea water and flipped on the other side and left for a period of no less than a month if the fish is small in size, while large and valuable fish take more time in the drying process, which may reach two months. He added that the process of drying fish is an ancient pharaonic craft, and that fishermen used it on distant fishing trips so as not to spoil the fish.

He also stressed that there are a large number of citizens of the Gulf countries requesting dried fish from the cities of the Red Sea, especially Saudi Arabia in particular.