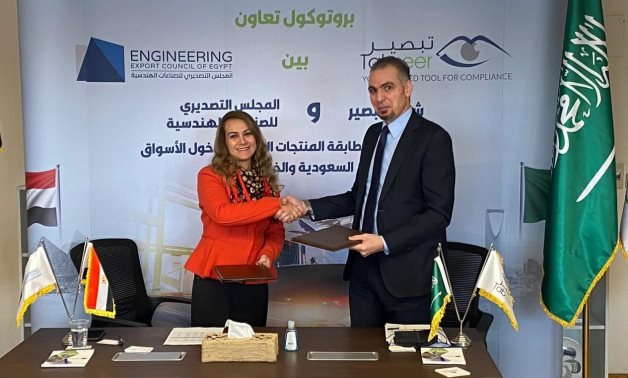 During the signing ceremony- Press Photo

EECE clarified in a press release that this protocol aims to facilitate the access of the Egyptian engineering companies into the Saudi and the Gulf markets.

Tabseer is a certified company by the Saudi Standards, Metrology and Quality Organization (SASO) which works mainly on the issuance of regulations that ensure the assessment procedures of goods, products, and services under approved standards.

The Executive Director of EECE May Helmy, said that Tabseer will support the Egyptian companies to obtain the necessary quality and conformity certificates needed to enter not only the Gulf market but also the Middle East and North African (MENA) markets.

“The protocol comes at a perfect timing, as the market already has a good appetite for the Egyptian products, especially after the Saudi ban that has been imposed on the Turkish goods, which gives the Egyptian companies a golden chance in the coming period,” she said.

Helmy noted that the Egyptian Engineering exports to Saudi Arabia jumped to $ 133 million during 2019, and these indices are expected to rise in the coming years.

For his part, the Managing Director of Tabseer, Emad Essa said that the engineering products, including machines, appliances and electrical equipment are the top imported products by the Saudi Arabian market that reach SAR 30 billion monthly, which acts as a promising opportunity for manufacturers and exporters in Egypt to access the market.

“it is a fruitful opportunity for the Egyptian products to boost their share in the Gulf market in general and the Saudi in particular, which is the largest in the region,” Essa Said.

He explained that the control measures imposed by Saudi Arabia are mainly to preserve the best quality. The process ensures the imported goods conformity to the Saudi market standards and enhances the safety of these products in order to maintain consumers’ trust which is a significant key for high competitiveness in the market.