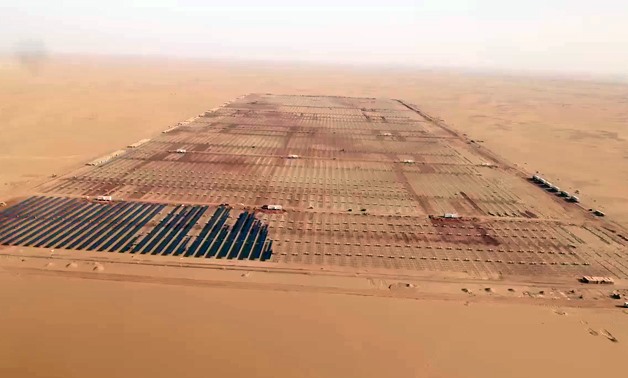 During the ceremony, Shaker expressed his happiness regarding the launch of the world’s biggest solar park in Egypt, explaining that this is a big move towards sustainable development and a green economy.

“We have been working on this project for two years and a half now,” Shaker said, expressing his happiness at the results achieved so far. “The Infinity Company has truly shown its seriousness and professionalism.”

“We went through a rough patch that ended in 2014,” said Shaker. Currently, according to the Minister, the Ministry of Electricity is working on building a nuclear power plant, which will produce 4,000 Mega Watts, and another plant that will produce energy from coal, which is set to produce about 6,000 Mega Watts.

Shaker also explained that the power plant will be officially inaugurated by President Abdel Fatah al-Sisi due to the importance of the project for the investment sector.

On the margins of the inauguration, Shokry told Egypt Today that lifting the subsidies from electricity bills will not take place during 2018. Instead, it will be extended over a three-year span; subsidies are set to gradually decrease during this period.

“We have a very big problem when it comes to subsidies, especially after it has risen to LE 69 million. If we continue on the same path and continue to use the same prices that we are currently using, the deficit will increase. This is because we are meant to get back the ministry’s money in full but this does not happen.”

Shaker further elaborated that he understands the pressures under which civilians currently live, explaining that they are working on offering citizens better service. To ensure that the level of service is better, explained Shaker, there is a need to increase electricity prices.

Shaker elaborated that the addition of clean energy to the national grid is set to reduce the prices of the photovoltaic cells used, thereby, reducing electricity. This will eventually, according to Shaker, lower the cost of electricity for the government and civilians.