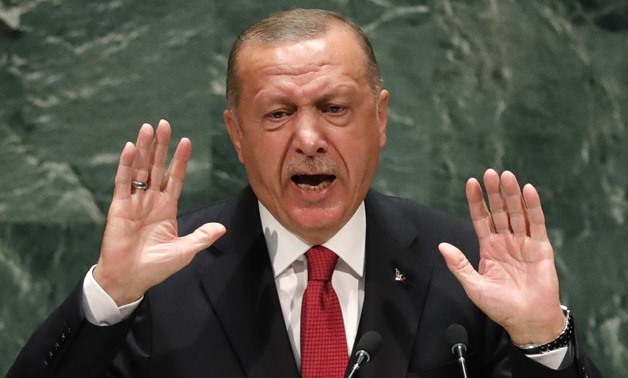 By: Egypt Today staff
CAIRO - 29 September 2019: Extra News TV channel broadcast on Saturday a compilation of leaked phone calls that took place in December 2013 between Turkish President Recep Tayip Erdogan and his son Bilal about getting rid of large amounts of cash they possessed after a corruption case was broken by the Turkish authorities.

The Turkish president told his son that “they launched operations in the morning, and they inspected the houses of” SOCAR Senior Adviser for Capital Markets Ali Aghaoghlu, gold dealer Reda Darab, “the son of Dhafer and the son of Moamar,” himself, and 18 others. Erdogan said the inspection was in relation to a major corruption case.

Last year, Darab, who was arrested in the United States in 2016, pleaded guilty in a lawsuit over helping Iran violate US sanctions, as reported by TNT. He was also a witness in the case against former executive of Turkish state-owned Halkbank Mehmet Hakan Atilla.

The latter was convicted last year of repatriating millions of petrodollars in the form of gold to Iran helping it circumvent sanctions. Atilla was arrested in 2017 in the United States but he was released and deported earlier this year after spending a few months in prison. That lawsuit implicated the incumbent Turkish president himself.

Erdogan instructed his son to move the belongings immediately. Belal’s response was “what do I possibly possess? It’s your money that is in the safe.” The Turkish president replied, “that’s what I am saying. I will send your sister Sumeyye.” He explained that his daughter was informed of the same developments and asked Belal to tell his elder brother as well and to know if he “possesses something.” Erdogan told Belal to call his uncle (the Turkish president’s brother), and tell him to “move the stuff out in the same way,” and to talk to his aunt’s husband as well. The aunt is the sister of the Turkish president.

Belal asked where the possessions should be put and Erdogan answered in “specific and special” places. A female voice next to Erdogan said “Beirat,” so Belal exclaimed and said “Beirat also has money!” The Turkish president replied, “meet them now and take your uncle with you.” Erdogan added he does not know if his own brother has money or not, and instructed Belal “to do something with his elder brother,” the Turkish president’s other son.

Belal enquired if his father would inform his sister, Sumeyye, of the place to which the money will be moved. The Turkish president replied, “Yes. Do something. Think of someone among you all. Think with your aunt’s husband and others.”

“We will see what we will do,” Belal responded. His father said they both must keep in touch until 10 o’clock because he was heading to Konya.

In another phone call, Belal told his father, “we met with Hassan, my elder brother, Beirat and my uncle. We think of several things. Beirat suggests giving part of the money to [businessman] Farouq Kalyongo and he will manage like he did with the other money… The other part we can give it to [businessman] Mohamed Gur. We will tell him to put it in the project we started together… In that way, the amount will be reduced and the rest can be put in different places.”

The Turkish president told Belal to go ahead and asked if Sumeyye had arrived. Belal said she got home and would later catch up with them. He reassured his father that the matter is over and that it would be resolved on the same day. Erdogan asserted the importance of getting rid of all the money.

On December 17, 2013 at 15:39, Erdogan asked Belal if he finished the other tasks he had assigned him. The answer was, “everything will be over today evening. We resolved it partially.” Belal said that they got rid of the money possessed by Beirat and that Mohamed Gur was about to receive the amount they planned to give him. “After the sunset, we will get rid of the other part,” Belal confirmed. The Turkish president asked what his daughter, Sumeyye, would do. Belal said she moved the money and took care of “both matters,” and that they would meet at night.

On the same day, Belal asked his father if he had called him as he received a call from a private number. The Turkish president negated he was the caller and enquired about what they had done so far. Belal told him that they got rid of a big portion and that €30 million were remaining. Belal said that Beirat suggested giving €25 million to businessman Ahmed Galik, and buying with the rest an apartment in Sehrizar Residences.

Erdogan questioned why they had not given Mohamed Gur all the money and concluded the matter. His son said they gave him €20 million, and were not able to give him more than that amount. He added that the place where Gur put the money had not enough space for more, and that they gave €10 million to a businessman called Tong, who said he could not take more.

The Turkish president drew his son’s attention to not talk about such matters blatantly over the phone and to manage as they see appropriate. He added that he would not be able to join them in the evening as he would stay in Ankara.

On December 18, 2013 at 10:58, Erdogan called Belal to make sure all the money had been moved and the answer was yes. However, Belal informed his father that the money, worth $730 million and 300,000 Turkish lira and put in the houses of Samandira and another city, will be given to Faek Ishik, lawyer and member of the Justice and Development Party (AKP), as they owe him a million Turkish lira. The rest would be given to “the academy.”

The Turkish president questioned why they had kept such money in the first place. Belal’s answer was that they were surveilled by cameras all the time. Belal asked about the identity of those who monitor their moves but was assured by the Turkish president that they took “some measures in Istanbul,” suggesting they all have some rest.

In May 2013, demonstrators took to the streets in Istanbul to protest turning historic Gezi Park into a shopping mall within an urban development plan of Taksim area. The protests became widespread across the country against the regime led by Erdogan and his party. The number of injuries and detention cases recorded 1,000 and 3,000, respectively.