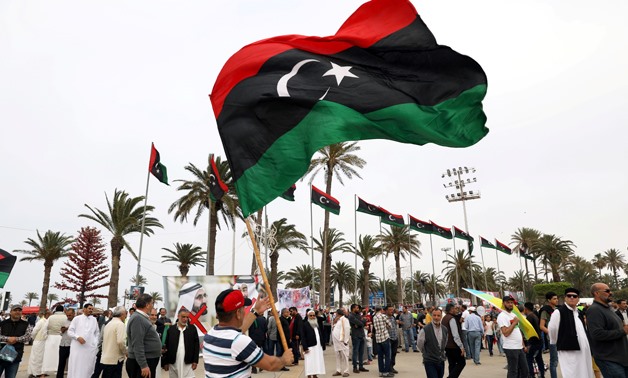 FILE PHOTO: A Libyan man waves a Libyan flag during a demonstration to demand an end to the Khalifa Haftar's offensive against Tripoli, in Martyrs' Square in central Tripoli, Libya April 26, 2019. REUTERS/Ahmed Jadallah - RC116B00BE60/File Photo

The minister advocated the activation of the joint Arab defense, and the adoption of the Cairo Declaration underlining a political solution for the crisis.

Huweij asserted that the Government of National Accord (GNA) - which denounced Egypt's call for the Arab League meeting – is non-constitutional and was not formed by the elected House of Representatives temporarily convening in Tobruk instead of Benghazi.

He added that the GNA was supposed to be an interim government for 1-2 years as provided by Skhirat Agreement signed in 2015 and that it has been expired for years.

Deputy Secretary General of the Arab League Hossam Zaki announced that the meeting is likely to be held next week week via video conference, and that Egypt's call was supported by many member states.
The Syrian Observatory for Human Rights (SOHR) reported Saturday the killing of 417 Syrian mercenaries brought by Turkey into Libya to fight in the ranks of the GNA militias against the Libyan National Army (LNA).

SOHR observed that the death toll consisted of 30 minors, and that around 2,600 mercenaries returned to Syria recently.

The observatory had earlier reported that Turkey transported 15,000 Syrian mercenaries into Libya, including 300 minors aged between 14-18, and that the majority of them belong to Sultan Murad armed group. In addition, 1,800 mercenaries arrived to training camps in Turkey before they move to the North African state.

The Libyan Center for Human Rights noted that the child soldiers phenomenon has become common in GNA-held areas, particularly Misrata, as minors are paid around $200 weekly.

On Friday, the LNA sent Special Forces to oil fields in order to secure them against any possible attacks by the Turkey-backed militias, and sent units of the Central Support Forces to Benghazi and Sirte.

In December 2019, the Tripoli-based GNA and Turkey signed two MoUs on defense and gas drilling eastern the Mediterranean. Turkey sent 1,500 officers and military experts to Libya to co-command the operations rooms of the GNA militias, and has been transporting arms by sea as well.

In January, the LNA recovered Sirte from the militias protecting the GNA. Nevertheless, the Libyan Armed Forces lost Oqba bin Nafea airbase in Al Watiyah district western the country and Tarhouna town, and retreated from Tripoli's outskirts. Yet, the LNA has downed around 70 Turkish drones piloted from the capital's Mitiga Airbase.

Earlier this week, 23 Egyptian expats in Libya were abducted and tortured by Al Hazm militia from Tarhouna and held in Misrata. They were later freed after diplomatic efforts by Egypt, and repatriated to their homeland on June 18.