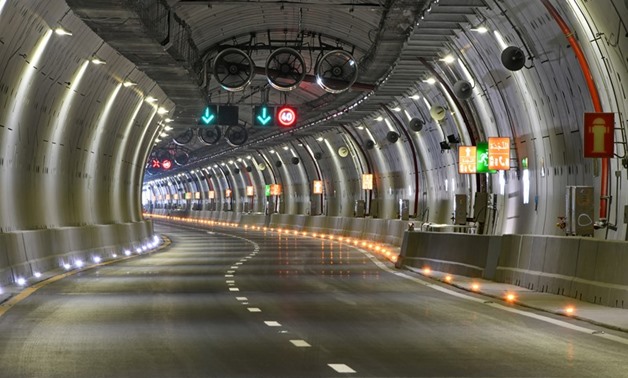 The inside of one of the Suez Canal tunnels - FILE

CAIRO – 25 April 2020: A bright future awaits Sinai after five tunnels below Suez Canal have been built to connect mainland Egypt to the peninsula and the Suez Canal Economic Zone. A network of tunnels and bridges will make the movement of people and goods easier than ever, attracting more investors to the promising area.

On April 22, Sisi witnessed the extraction of a tunnel-boring machine in Suez city, signaling the launching of the Ahmed Hamdy 2 tunnel, connecting the city to South Sinai. Ahmed Hamdy 1 tunnel in the same city was opened in 1981. It is also used to connect Cairo to South Sinai. it was once the only tunnel under the surface of the vital waterway for 38 years. It is named after an Egyptian engineer who was killed during the October 1973 war with Israel.

The Ahmed Hamdy 2 tunnel has two lanes with a length of 4,250 kilometers and a diameter of 11 meters and is parallel to the old tunnel.

Two other tunnels in Ismailia were inaugurated in May 2019; they connect eastern Ismailia with western Ismailia in 15-20-minute trip by car at 60 kilometers per hours. Western Ismailia has land borders with Central Sinai, and the tunnels are expected to take Sinai to far better economic and social horizons.

The Ismailia tunnels are the largest in Africa at six kilometers in length and 13.20 meters in diameter. Each one is ranked third largest tunnel worldwide in terms of the diameters. They are connected with horizontal passages every 500 meters as a safety measure to evacuate people in case of emergencies. Each tunnel has two lanes, and cost 12 billion EGP. Globally, such projects take five to seven years to be finished, but Petrogate and Concord built them in three years, all by Egyptian staff. Forty Egyptian engineers were trained in Germany on building tunnels.

The tunnels are at 70 and 53 meter-deep below Suez Canal. There is an emergency room every 250 meters, emergency passages, stairs and 60-centimetre wide concrete bumpers along the two tunnels. There are antifire systems, CCTV, advanced led lighting system and microphones every 100 meters to guide drivers in case of emergencies.

In the Mediterranean city of Port Said, Arab Contractors and Orascom built two tunnels by November 2019. They shorten the travel time crossing the Suez Canal to 10-20 minutes, instead of waiting for a turn on ferries for days. The Port Said tunnels are 11.4 meters in diameter and are four kilometres long, connected with emergency passages. Up to 2,000 vehicles can cross the tunnels per hour.

The six tunnels enjoy top notch security measures outside of the tunnels at the two ends, and inside the tunnels with the most advanced x-ray system. In the Ismailia tunnels, there are 10 checkpoints, four for regular cars and six for trucks and buses.

Moreover, five bridges have been constructed above the Suez Canal, crossing over to Sinai to facilitate the transportation of goods between the cities east west of the canal.

Suez, Ismailia and Port Said are the three cities overlooking the Suez Canal that were mainly given life by the waterway, and are split in half by the it. They share borders with Egypt's Delta, as well as the Sinai Peninsula.