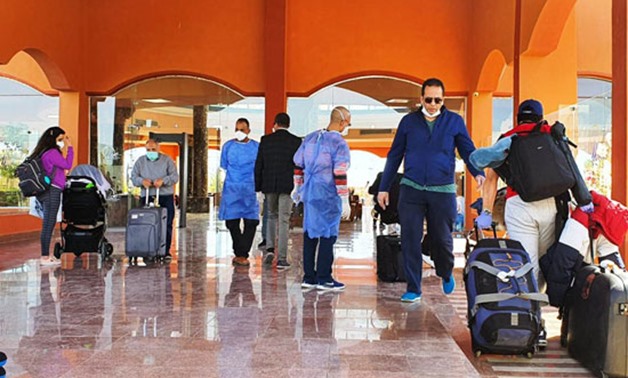 Minister of Immigration and Expatriate Affairs Nabila Makram told TV host Amr Adib on Friday that stranded Egyptians are classified into categories that are citizens who have been on business trips and tourism trips, were visiting relatives, and students who had to leave the dorms and have nowhere to stay.

"At this stage, priority is given to those and not expats who want to return after their contracts were ended or their businesses were shut down," the minister stated.

It is worthy to mention that the number of Egyptian expats recorded in 2019 14 million with 65 percent residing in the Arab Gulf.

The minister revealed that stranded Egyptians who have been repatriated paid for their tickets, and that those waiting to return are willing to also pay for their 14-day quarantine.

The minister declared that Pope Tawadros II of Alexandria agreed with the Coptic Church in Kenya to host Egyptians stranded in Africa, and that the state works on repatriating more than 100 Egyptians stuck in the Maldives.

Makram added that the committee formed to coordinate the return of stranded Egyptians includes the ministers and officials of the ministries of health, immigration, civil aviation, and foreign affairs, and is presided by Prime Minister Mostafa Madbouly who will announce soon what the state will do about citizens who are still stuck abroad.

On April 9, an EgyptAir flight carrying 66 Egyptians arrived in Cairo from Nigeria.

On April 5, the second EgyptAir flight carrying from Washington around 250 stranded Egyptians, including 49 students aged between 15 and 17, landed in Marsa Alam.

On April 3, an exceptional flight took off from Washington to Egypt with 293 passengers and 13 babies on board, to evacuate Egyptians stranded in the United States over coronavirus.

On April 2, EgyptAir operated the second exceptional flight to Heathrow Airport to bring back the Egyptian nationals stranded in London.

On March 26, EgyptAir operated a flight from Cairo to Brussels, through Hurghada, to send back Belgian and European nationals who had been stuck in Egypt, and also to return around 150 Egyptians stuck in a number of European states.

Between March 19 and March 26, EgyptAir operated 33 flights to bring back hundreds of stranded Egyptians from different countries.

State-owned Air Cairo flew two exceptional flights from Sharm El Sheikh International Airport to London in order to send back home tourist groups that were still in Egypt, and bring back around 300 Egyptians, who were stuck in the British capital.

Makram clarified that the ministry is currently identifying the number of Egyptians stuck in Southeast Asia to bring them back home, revealing that the number of queries and help requests communicated by stranded Egyptians worldwide is 12,120.

CAIRO - 29 March 2020: Minister of Civil Aviation Mohamed Manar Enaba communicated with Tunisair to return 37 stranded Egyptians, who had sought the Ministry of Immigration and Expatriate Affairs for help. A number of those were on business trips while others are working for UNICEF and UN organizations working in Libya so they had to head to Tunisia to get back.