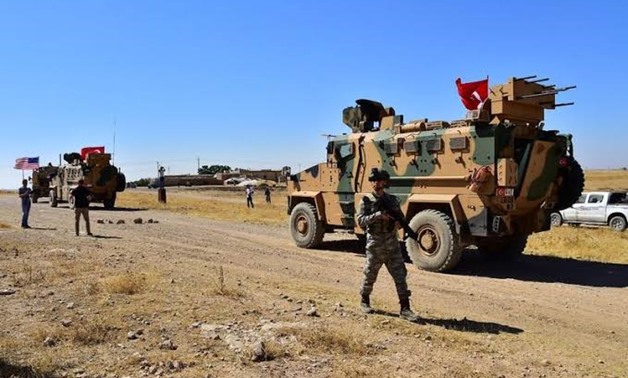 CAIRO - 3 February 2020: Chairman of the Syrian Observatory of Human Rights (SOHR) Ramy Abdel Rahman explained to Al Arabiya Al Hadath on Monday how the engagement between Turkish troops and the Syrian Armed Forces occurred causing casualties among the former.

Clashes started when the Syrian army took over Jobas village western Saraqib and was moving on the road extending from Aleppo and Latakia as Turkish troops attempted to impede their advancement.

On Sunday, the Russian Reconciliation Center for Syria declared that the defenses of Khmeimim Air Base detected and obstructed drones that were launched from Idlib’s de-escalation area towards the base. The center has called upon armed groups to abandon provocations and seek a peaceful settlement.

The Syrian Armed Forces freed on Sunday three villages in southeastern Idlib after fierce battles with armed groups, and are now going after defeated militants. The villages liberated are Anqrati, Kafr Battikh, and Kafr Dadikh.

Raids and barrel bomb attacks persist in Saraqib, Sarmin, Al Nerba, Afes, Hass and other villages in the eastern and southeastern of Idlib. Also, Russian strikes continue in different zones of Idlib.

SOHR reported that numbers of airstrikes by Russian and Syrian jets are 73 and 86, respectively. The former targeted places in Atarib and the outskirts of Anjara in the west of Aleppo, Al-Qanater, Al-Kammari and Arnaz in the southern countryside of Aleppo, Taftanaz, the perimeter of Taftanaz Military Airbase, Saraqeb, Sarmin, the outskirts of Areha, Al-Nayrab, Binnish and Al-Mastuma in Idlib countryside. The latter struck Areha, Sarmin, Saraqeb, Al-Nayrab, Tal Sultan, Afes, Qumaynisan and other areas east and south-east of Idlib.

Syrian helicopters also dropped 64 barrel bombs on areas in Saraqeb, Sarmin, Al-Nayrab, Mantaf, the vicinity of Areha and Saraqeb countryside while the ground forces fired hundreds of rockets and shells on Aleppo, Idlib, hama and Latakia countryside.
Four children and three females out of nine injured civilians were killed in a strike by Syrian jets against a vehicle carrying evacuated people in Jam’eyyat Al-Rahal in the western countryside of Aleppo.