Japan keen to cooperate with Egypt in promoting development 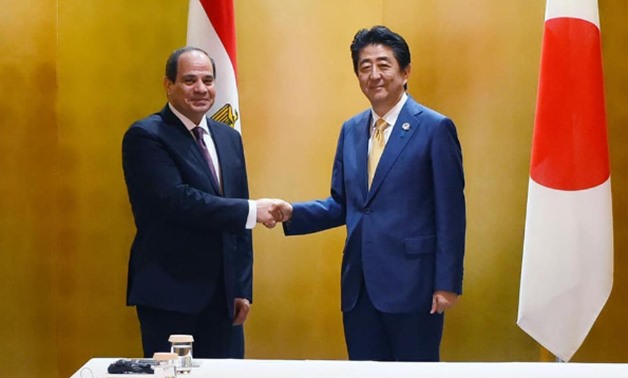 Abe has received Egyptian President Abdel Fatah al-Sisi Thursday in Osaka, where they held a session of talks in the presence of delegations from the two countries. Sisi arrived in Osaka to attend the 2019 Group of 20 (G20) summit set to be held on June 28-29.

Abe highlighted Japan's keenness to intensify its efforts to implement bilateral projects in various fields, especially education, culture, technology, energy, and transportation. He also referred to Japan's contribution in the Grand Egyptian Museum, which is considered a symbol for cultural cooperation between the two countries aiming to support the tourism sector in Egypt, Radi said.

President Sisi affirmed his appreciation of the strong and fruitful relations with Japan, congratulating the Japanese government and people as new Emperor Naruhito officially assumed the Japanese throne in May.

The discussions between Sisi and Abe also addressed preparations for the seventh Tokyo International Conference for African Development (TICAD) set to be held in August, Radi said.

President Sisi invited Abe to visit Egypt, adding that he hopes that the Japanese prime minister participates in the inauguration ceremony of the Grand Egyptian Museum in 2020.

Sisi on Friday will take part in the opening session of the two-day G-20 summit.

Speaking to the Egyptian press, the presidential spokesman said the president will be having a flurry of intensive activities during his stay in Japan, including attending a China-Africa mini summit, together with the leaders of China, South Africa, Senegal and the UN secretary general.

Also, Sisi will participate in a working session on global economy, trade and investment, as well as a special thematic session that focuses on innovation, digital economy and artificial intelligence, the spokesman added.

The spokesman noted that the president will hold one-on-one talks with a host of world leaders participating in the G-20 summit.

Sisi will also be attending an official dinner banquet hosted by Abe for world leaders attending the summit, he said.

Japanese Ambassador to Egypt Masaki Noke said earlier that the G20 summit discusses trade, digital economy and innovation, and will host sideline meetings between state leaders of China, United States, Japan and the European Union. Among the attending leaders will be US President Donald Trump and Indian Prime Minister Narendra Modi.

During a press conference this week, Ambassador Noke highlighted the importance of President Sisi’s participation in G20 while chairing the African Union (AU), and representing 50 African states.

“Egypt, by participating in the summit, will be able to provide an important model in education, and a vision on human resources in African and Middle East,” he added.

Noke further noted that the summit represents an important opportunity to discuss ways of enhancing freedom of world trade.

“Egypt seeks effective participation in this summit. It will discuss a number of important issues between Egypt and Japan,” Minister of Trade Amr Nassar previously said during his meeting with Ambassador Noke.“It [Egypt] will also review its development experience of comprehensive economic reform and its vision of ways to strengthen international efforts for promoting the African continent,”Nassar added.