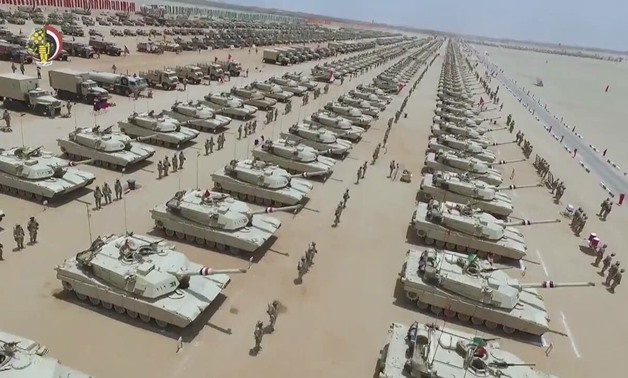 CAIRO - 1 June 2019: Egypt ranks 12th in the world in terms of military strength in 2019, according to Global Firepower (GFP). The ranks for naval, aircraft, and tank strengths are sixth, ninth, and 14th, respectively.

The total aircraft strength is 1,092 jets. The breakdown is 211 fighters, 341 attack aircraft, 59 transports, 388 trainers, and 293 helicopters including 46 attack helicopters.

In 2014, Egypt and France inked a €1 billion arms deal whereas France furnishes four Gowind battleships to the Egyptian Navy. The first corvette was produced in France and delivered in Lorient in September 2017. The other three were to be built in Egypt under a transfer of technology agreement, according to France 24.

One of those was launched in September 2018 as the first ever Egyptian made warship. The ‘Port Said Corvette’ is manufactured by Alexandria Shipyard Company in cooperation with France’s state-owned shipbuilder Naval Group.

In 2015, Egypt signed an agreement to buy French weapons worth €5.2 billion, including 24 Rafale combat jets made by Dassault Aviation, a multi-mission naval frigate, and air-to-air missiles.

In 2016, both countries signed agreements for the purchase of weapons including fighter aircraft, navy vessels and a military satellite communication system worth €1 billion. In the same year, Egypt received two Mistral helicopter carriers as part of this deal.

In 2011, Egypt had ordered two Type-209/1400 submarines from Germany before ordering two others in 2014. The first two arrived in December 2015 and August 2017, respectively. In May, Commander of Naval Forces Ahmed Khaled received the third in the German city of Kiel.