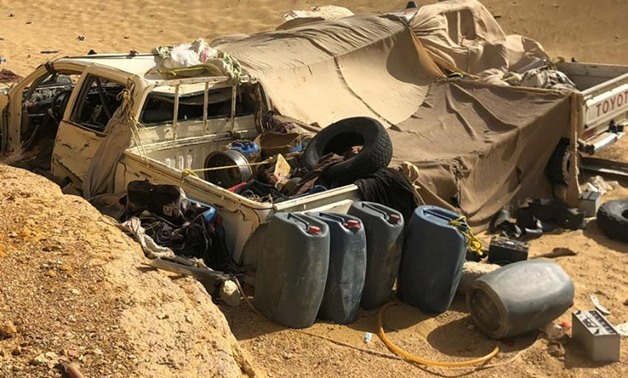 CAIRO - 11 March 2019: The counterterrorism operations carried out by the Egyptian Armed Forces and police over the past period resulted in killing 46 terrorists and three soldiers in fire exchanges that took place in North and Central Sinai.

That is in addition to the destruction and confiscation of 17 vehicles and 14 motorcycles that did not have number plates. Those were used by terrorists and detected during surveillance operations and raids.

One hundred criminal elements, suspects, and fugitives were arrested. Legal measures against them are taken.

The security forces discovered and razed a number of terrorist hideouts where radioactive substances, firearms, ammunition, and explosives were found. Those would be used to launch terror attacks in North and Central Sinai.

Military engineers discovered and disposed of 204 explosive devices that were planted in the roads used by security forces as well as 10 tunnel openings on the borders in Rafah.

Also, the security forces confiscated a number of RPGs and Stokes mortars used by terrorists to attack security concentrations.

The Egyptian Naval Force has been securing maritime boundaries, inhibiting smuggling and infiltration through the Red Sea and the Mediterranean.

In a massive campaign waged by Border Guards in collaboration with police, 244 feddans cultivated in poppies, two tons of bango and 1 million narcotic tablets were found and eliminated. That is in addition to quantities of black powder used in manufacturing explosive devices.

Furthermore, Border Guards have confiscated 117 vehicles used in smuggling as well as a number of firearms and ammunition.

On February 9, 2018, the Comprehensive Operation - Sinai 2018 was launched to boost counterterrorism operations all over the country. The trigger behind the decision was a terror attack on Rawda Mosque in North Sinai which resulted in over 300 victims.