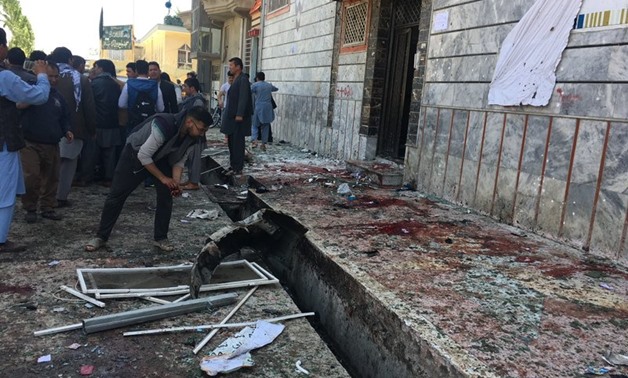 People gather outside a voter registration center, which was attacked by a suicide bomber in Kabul, Sunday, April 22, 2018. (AP Photo/ Rahmat Gul)

CAIRO – 8 March 2019: An attack on a Shiite Muslim gathering in Kabul on Thursday has left 11 people dead, up from an earlier estimate of three, the Afghani Ministry of Interior announced on Friday.

According to reports, armed militants fired mortar bombs at the gathering to commemorate the anniversary of the death of a leader of the Hazara, the third-largest ethnic group in Afghanistan.

Hundreds of people including top government officials such as Chief Executive Officer Abdullah Abdullah and at least three candidates for a July presidential election were at the event, Reuters reported.

Nasrat Rahimi, spokesman for the ministry, said in a statement 95 people were wounded in what officials initially described as a rocket attack.

Rahimi said the Taliban planned the attack. On Thursday, the Islamic State militant group said it was responsible.

Sunni Muslim militants, including the Taliban and Islamic State, have repeatedly attacked Hazara people in Afghanistan and neighboring Pakistan over the years.