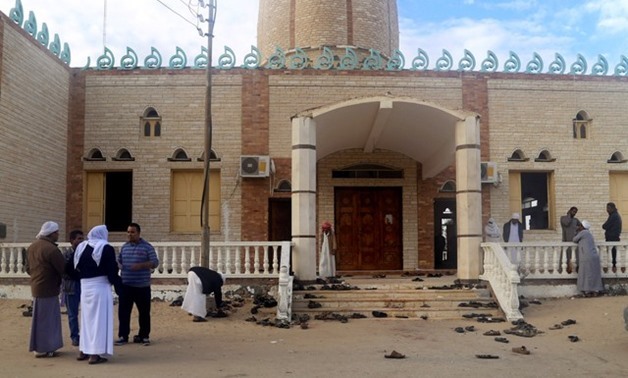 Nasr said that the donation made to the Egyptian Red Crescent aims to support those who were affected in Al-Rawdah village by training children in schools on how to use first aid kits and the ways to prepare for disasters, as well as by raising their awareness on health matters to enable them to care for patients at homes.

She further remarked that the donation focuses on women and youth by providing them with vocational training workshops for women breadwinners and youth, adding that Egypt currently puts North Sinai at the top of its priorities.

In this regard, Nasr expressed her thanks and appreciation to Minister of Local Development Abu Bakr al-Gendy, who attended the signing ceremony, for supporting investments in the most needed governorates, particularly in North Sinai.

She stressed that a meeting was held with Gendy to discuss ways to help Upper Egypt governorates through a $500 million fund provided by the World Bank.

Gendy stressed that the donation will be used for social awareness and health services, as well as women and youth empowerment, expressing his thanks to Nasr for providing this donation through USAID.

On the other hand, the Egyptian Red Crescent has a program for this donation, which includes livelihood assistance, job opportunities, vocational training and psychological support for around 600 children in primary schools.

“These funds will allow the Egyptian Red Crescent to provide psychosocial support to further the process of recovery for those children who lost loved ones,” said U.S. Chargé d’Affaires Goldberger at the signing ceremony.

He added that the U.S. is assisting the Egyptian Red Crescent in providing livelihood support to families deprived of income due to the attack.

“This is from the American people to the Egyptian people, a sign of friendship and sympathy, and part of our unbending commitment to defeating terrorism together,” added Goldberger.

Since Al-Rawdah Mosque’s attack on November 24, Egypt has focused on the development of Al-Rawdah village.

The fund’s executive director, Mohamed Ashmawy, stated on November 25 that the fund is considering providing all aspects of support to Al-Rawdah village, stressing that the fund will work to provide all the needs and support possible to the village’s families.

In addition, the director of the Youth and Sports Directorate in North Sinai, Hassan Abdel Wahab, said that there is an LE 7.5 million plan to develop Al-Rawdah Youth Center in Bir el-Abed, North Sinai.

The development project will include removing the current building and installing a new one with activity halls, which will cost LE 3.5 million; a kids’ garden costing LE 2 million; and a football field with the remaining LE 1.5 million.