El Shennawy to be called in Tokyo Olympics with Egypt 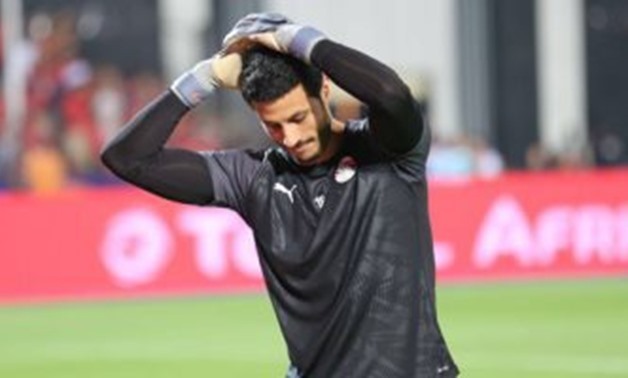 Osama Abdel-Karim, the coach of Egypt's Olympic goalkeeper, settled o the inclusion of Al-Ahly goalkeeper Mohamed El-Shennawi to the Tokyo Olympics list as soon as it was settled with Shawky Gharib to include a goalkeeper within the trio over the age.

The Olympic team has the right to include three players over 23 years at the Tokyo Olympics, in accordance with the rules of the International Football Association (FIFA).

Abdel Karim said in statements to The Match program: "It is possible to include a goalkeeper other than the trio who played the African U-23 Championship, that will be settled with Shawky Gharib, coach."

Speaking of his choice of the goalkeeper over the age, Abdel Karim revealed, "Mohamed El-Shennawy is Egypt's first goalkeeper at the present time because of his participation in the African Championship and the World Cup, and he plays with Al-Ahly continuously."

"El-Shennawy presents great levels recently and he is a brilliant goalkeeper and he has a lot of experience. We will meet to discuss the inclusion of the great trio."

Egypt U-23 national team manager, Shawki Gharib, announces that he would welcome Liverpool Egyptian winger and the nation’s biggest football star, Mohamed Salah, into his team at the Tokyo 2020 Olympics.

Gharib led the team to the Olympic Games after clinching 2019 U-23 Africa Cup of Nations title at home after defeating Ivory Coast 2-1 at the final.

“If salah wants to join the squad at the Olympics. I will add him to the team.” Gharib said on Thursday.

Gharib added “In Rio 2016, Brazil added Neymar Junior to their squad to get the Gold medal. I will include my best players at the Olympics.”

Salah was one of the U-23 team’s players who participated in 2012 Olympic Games in London, where Egypt were eliminated from the quarter finals after 3-0 loss to Japan.