Durant nets 50 as Warriors advance to NBA second round 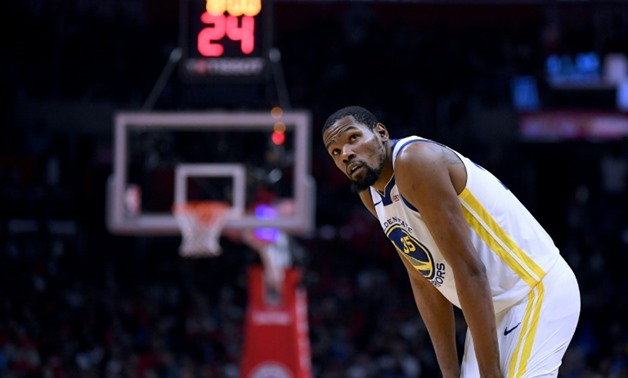 Kevin Durant scored a playoff career high 50 points as the Golden State Warriors blasted their way into the second round of the NBA playoffs by clobbering the Los Angeles Clippers 129-110 on Friday.

"That was one of the great performances I've ever seen in my life," Warriors coach Steve Kerr said. "He's the ultimate weapon because there's no defense for Kevin."

Durant was at a loss to explain his masterful performance on Friday.

"I am just out there playing. I was so lost in the game I am not really thinking about anything else but winning the possession. It is tough to explain. I am just in it," he said.

The Warriors advance to face the Houston Rockets, beginning on Sunday in Oakland. Houston was already in Oakland waiting for the Warriors to finish the series so they can start the second round on Sunday.

Durant said the Rockets are going to be a whole new challenge.

"They are a talented ball club with a lot of high IQ players that shoot well and penetrate well so we got our work cut out for us," he said.

Draymond Green had 16 points, 14 rebounds and 10 assists, Stephen Curry scored 24 points and Andre Iguodala contributed 15 points off the bench for the Warriors, who won three road playoff games in the same series for first time in franchise history.

The Warriors put the brakes on Clipper reserves Lou Williams and Montrezl Harrell, who had done so much damage against them in the two Clippers victories. The pair came in leading Los Angeles in scoring during the series at 24.4 and 20 points, respectively.

Williams scored eight points on a horrific three-for-21 shooting, and Harrell was limited to just 10 points.

"He's Kevin Durant. We didn't roll over. We didn't just say, come on, just give us 50 tonight," said Clippers Patrick Beverley. "He's a hell of a player. The shots he took, he made some tough shots."

Williams described Durant as "a special" player who is unguardable when he is on his game.

"Sometimes you come across special people and it doesn't matter what you send to them," Williams said. "There's no scheme. There's nothing you can do.

"We tried everything. It didn't work.

"Even the game he came out, he was like 'I'm Kevin Durant, you all know who I am'. That's a bold statement to make when you are going to see some guys who are extremely competitive.

"It wasn't a lack of effort on our part. He's an all-world professional and he proved it."

Danilo Gallinari had 29 points, Shai Gilgeous-Alexander scored 22 and Beverley finished with 11 points, 14 rebounds and seven assists in the loss.