'Ashamed' Gomes opens up on hellish time at Barca 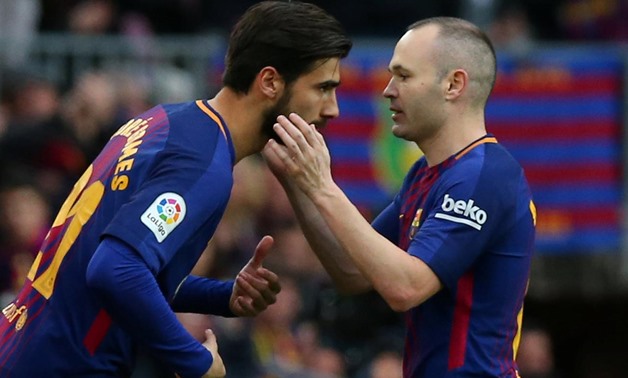 BARCELONA, March 12 (Reuters) - Barcelona midfielder Andre Gomes has admitted he is ashamed about his performances for the La Liga side and sometimes feels afraid to leave his house.

The Portuguese playmaker, signed from Valencia in July 2016 for 35 million euros ($43 million), plus a potential 20 million in add-ons, has struggled since arriving at the Nou Camp scoring only three goals in 72 appearances in all competitions.

Although coach Ernesto Valverde and his predecessor Luis Enrique have defended Gomes, the 24-year-old is regularly criticised in the media and whistled by his own supporters.

"Maybe it's not the best word but (life at Barca) has become a bit of a hell, because I started to feel the pressure," Gomes told Panenka magazine in their March edition.

"The feeling that I have during games is bad. Thinking too much hurts me, because I think about the bad things. Although my team mates support me a lot, things don't go for me how they want them to go."

Gomes, who has started only four games in the league this season, admitted that even beyond the pitch his life has been affected by his form.

"On more than one occasion I have not wanted to leave the house. People look at you and I'm afraid to walk in the street out of shame," he said.

Gomes was jeered by Barcelona fans during the 1-0 win over Atletico Madrid on March 4 after coming on as a substitute for the injured Andres Iniesta. Should the captain remain sidelined, Gomes could play in his stead on Wednesday in the Champions League last 16 second leg against Chelsea.