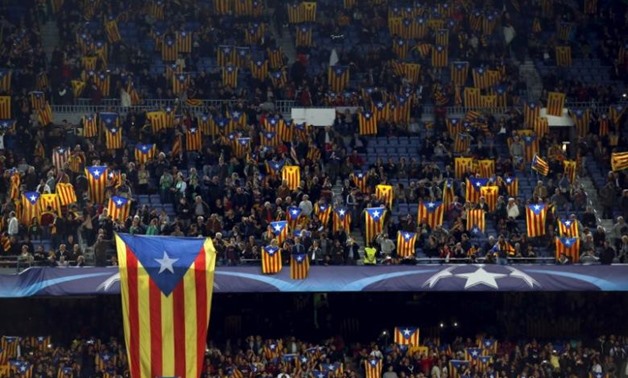 CAIRO - 11 September 2017: Football fans are so devoted to their teams, they follow their players everywhere. They go to stadiums not only to watch the match, but to back their team. The results of their teams are exactly what makes or breaks their week, simply, it is their mood shifter. In Catalonia, though, it is different; football is more than just a game.

People in Catalonia are so loyal to their club, FC Barcelona, which they feel truly reflects their identity.

Barcelona is an important part of Catalonia’s history. The club was founded in 1889 and has since then played the role of the protector of Catalonia, preserving its culture from their enemies.

Barcelona participated in every battle Catalonians entered, from the Spanish Civil War in the 1930s till their battle for independence nowadays.
Catalonia was an independent nation until 1714, and then it came under Spanish control. Since then, Spain has kept trying to demolish Catalan heritage, while Catalonians fight to preserve it.

Barcelona supported the Catalan movement throughout history. The club participated in the Spanish Civil War between Madrid’s Nationalists under General Franco’s command and the Republicans. The club itself suffered and struggled exactly like its fans. Barcelona paid the heavy bill and presented a precious sacrifice for the sake of Catalonians, as the club’s president, Josep Sanol, was killed by Franco’s soldiers.

In 1939, Catalonia lost their battle, and Franco’s soldiers controlled the city, banning the people from using their language and from raising their flags. Franco won the military battle and wanted to demolish Catalan culture.

Barcelona’s stadium, Camp de Les Corts, was Catalonians’ haven, where they could speak Catalan and support their team. Barcelona’s matches against Real Madrid since then have turned out to be political rather than simply being a sportive competition, with Catalans looking to Barcelona as their savior.

The first Classico between Barcelona and Real Madrid after Franco’s death in 1976 witnessed Catalan fans raising their flags and singing their chants against Madrid.

Barcelona’s successes during recent years has been an added value to the Catalan movement, granting the movement a worldwide spread between football fans who frequently ask about Barcelona’s fate after independence.

Barcelona players, presidents and fans have always showed their support for the Catalan movement on and off the pitch. Barcelona fans start to sing Catalan Independence chants 17:14 minutes into every home game to remind the world of the year 1714, when Catalonia lost their independence.

Barcelona is Catalans’ pride, with their beautiful football and their great achievements.