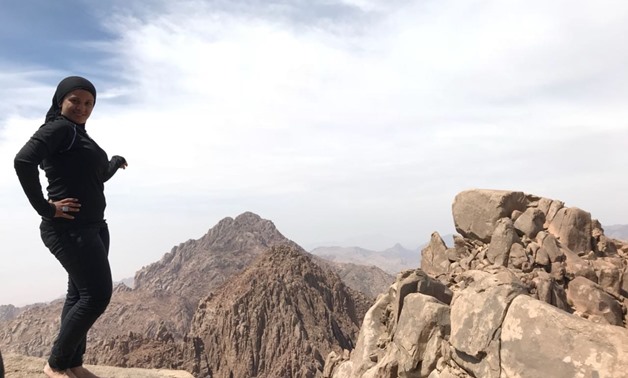 Mai Adel on the top of Rimhan Mountain, South Sinai, in March 2018. Adel likes to take a picture with bare feet at the top of every mountain she climbs to "feel the energy of the place" unless it is too cold.

CAIRO - 7 January 2018: She began by following her passion in exploring unbeaten tracks in South Sinai, climbing the lesser known mountains, and then mounting Egypt's tallest 10 peaks in the span of 18 months. Finally, she embarked on organizing hiking trips in the rugged landscape, a mission that usually men assume.

Mai Adel, 39, first got intrigued by hiking in Siwa in the far west of the country. She climbed Dakrur Mountain, a hill that gives a panoramic view of the oasis, and watched a heavenly sunrise in 2013.

"The Bedouin guides know me well and know what I did and what I can do. That's how I became confident that I can lead people in hiking trips," the software developer told Egypt Today. Mai Adel at the peak of Egypt's 10 highest mountains

Adel created the Facebook page "She Hikes," and despite the name, men have reached out to go on her trips. In fact, one tribe in South Sinai, Hamada tribe, approved in March that their female members work as guides, according to AFP, in a dramatic move per Bedouin traditions.

Adel was initially motivated by all the beauty she witnessed while climbing the 10 mountains, the highest of which is Mount Catherine at an elevation of 2,642 meters. She decided to spread the passion among those who think they cannot climb mountains, herself being a woman in her thirties, and from Fayoum, a largely conservative, agricultural city to the west of Cairo.

"The difficulty did not lie in the height as much as the nature of the mountain. I found Rimhan [which ranks eighth in the highest 10] the most challenging due to its steep slopes and unstable rocks," she added, noting that only one Bedouin guide had climbed the mountain but refused to climb it again. She climbed it in March 2018 with a group of friends and a Bedouin guide who hadn't climbed it before. The leader of the group, Mahmoud el-Gamal, was the one who found a route to the top. He died of a lightning strike in November the same year after climbing a mountain called Jerab al-Reeh, or "the bag of wind."

Adel and one other friend climbed Li'dah, the sixth highest mountain, on their own while a Bedouin guide waited at the foot of the mountain because no guide knew the way to the top. Adel had climbed other mountains by mistake and tried to find it over an entire year, and she even took a geography and map reading courses to locate it. Li'dah, which is very steep, is characterized by very small, unbalanced rocks that slid off once Adel stepped on them, and other very high, smooth rocks that are difficult to reach, according to Adel. The intensity of the wind at that particular mountain is also too strong that it knocked her off a few times. Mai Adel with a camel in South Sinai

She does not organize trips to Rimhan or Li'dah and does not recommend them to the hikers due to the dangers she faced climbing them. Organizing trips for her is not about the physical challenge.

"Trips to the same natural location deeply vary depending on the organizer and how they view the place and how they want to make people feel," Adel said

"I love nature in general and mountains in particular. I try to convey the philosophy of loving and living in nature," she added.

Adel also loves storytelling, so she sure she tells her hikers about the history of every mountain they go to, how it got its name, and all stories that might surround it.

She already climbed Mount Kilimanjaro in Tanzania in January, and her next endeavor is becoming the first Egyptian woman to climb Everest. Mai Adel at the top of Mount Kilimanjaro in January 2020