FIDO DIDO is the star of new international 7up campaign 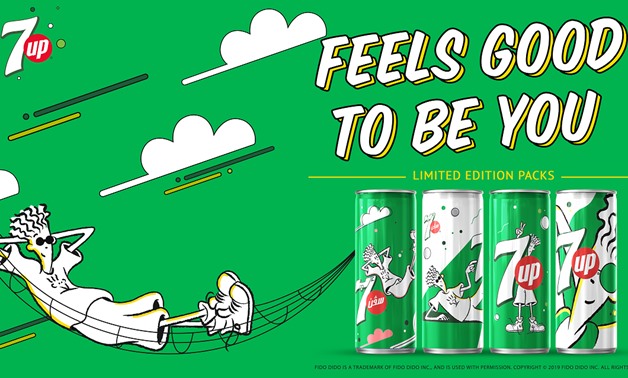 FIDO DIDO is the star of new international 7up campaign

Cairo, 18th March, 2019 – #FEELSGOODTOBEYOU – Two pop culture icons reunite once again: 7UP®, the refreshing lemon-lime beverage, is celebrating its 90th anniversary this year with it’s star, the witty, wriggly-haired Fido Dido. Fido Dido, the famous character known for his quirky, fun attitude, is back in a fresh, new way in the latest iteration of the 7UP international campaign, “Feels Good to be You.” He can be found everywhere you look, from limited-edition packaging to TV and digital creations.

With Fido’s cool comeback, 7UP isn’t just provoking nostalgia amongst its fans who have long associated the brand with Fido’s chill mentality. It’s also encouraging people to slow down, appreciate the little things in life and introducing the character and his mentality to a new generation.

“PepsiCo celebrates its 90th anniversary, by releasing 7Up products in the market with a campaign that revives Fido Dido’s personality. Fido Dido comes off as the face of the campaign because 7UP stands for bringing people together and encouraging them to relax and unwind. In today’s increasingly connected world, Fido’s message is more important than ever as it reminds us that sometimes all you need to do is sit back, unplug from your daily routine and enjoy the moment – ideally with a refreshing 7UP,” said Mohamed Shelbaya – PepsiCo Egypt CEO

Fido’s effortless confidence and limitless ability to chill, no matter the time or place, endeared him to consumers in the 90’s, and resonates even more so today. 7UP fans in more than 50 countries can look forward to a campaign that brings Fido to life in video content and in-stores.

Visit https://www.facebook.com/7upEgypt/ for more information and join the conversation on social media with #FEELSGOODTOBEYOU.

About PepsiCo
PepsiCo products are enjoyed by consumers one billion times a day in more than 200 countries and territories around the world. PepsiCo generated more than US $63 billion dollars in net revenue in 2017, driven by a complementary food and beverage portfolio that includes Frito-Lay, Gatorade, Pepsi-Cola, Quaker and Tropicana. PepsiCo's product portfolio includes a wide range of enjoyable foods and beverages, including 22 brands that generate more than US $1 billion dollars each in estimated annual retail sales.
At the heart of PepsiCo is Performance with Purpose – our fundamental belief that the success of our company is inextricably linked to the sustainability of the world around us. We believe that continuously improving the products we sell, operating responsibly to protect our planet and empowering people around the world is what enables PepsiCo to run a successful global company that creates long-term value for society and our shareholders. For more information, visit www.pepsico.com.