Are Egyptian stray animals unfortunate to be in Egypt? 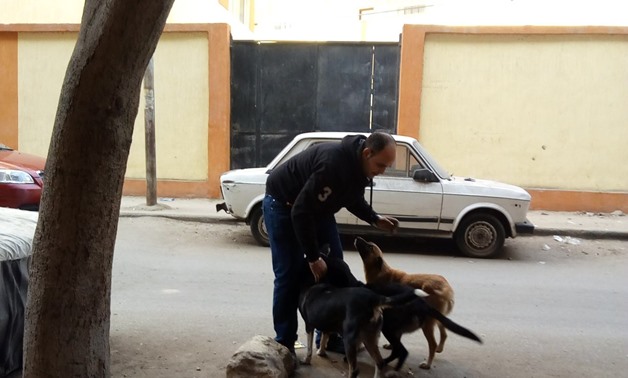 CAIRO – 8 April 2018: Egyptian animal rights advocacy groups have intensified their efforts and campaigns over the past few years to raise awareness of animal rights after a number of high-profile cases of animal abuse. Their campaigns seem to have paid off.

In 2015, a video of a dog named “Max” being stabbed to death caused uproar, and Al Ahly Club was accused of poisoning stray cats. A year earlier, el-Gezira Club was also accused of another mass cat poisoning. The campaigns have had an impact on public opinion and, perhaps, the judiciary. The three young men who killed "Max" were sentenced to one to three months in prison. The club cases, however, did not lead to a verdict.

The campaigns have also relatively succeeded and helped improve the relationship of Egyptians with animals. Since then, posts on social media promoting mercy towards animals have significantly increased. From posts that ask people to wash empty tuna cans before throwing them away so they do not attract cats and injure their mouths to posts telling people how to feed wild birds, such posts bear large numbers of shares.

Erhamo organization, one of the animal rights societies in Egypt, has launched a public awareness campaign on social media, encouraging people to feed stray animals.The initiative called upon the people to bring food and water for the stray dogs, Erhamo organization’s Facebook page admin told Egypt Today in a message. “Some Egyptian volunteers usually bring food and water for stray animals, particularly on Fridays,” the admin said, “when groups of volunteers gather in a certain place to feed its stray animals across Cairo.”

Simultaneously, many people try to raise awareness about animal rights via Facebook by posting some tips and information on ways to help and protect animals. A Facebook user asked people to check under their cars before moving, as kittens or pups usually lie beneath cars.

Some users asked people to put out plastic tubs filled with water to quench animals’ thirst, while others urged donating money or efforts to any animal organization and standing against wrongdoers to stop them from harming animals. These posts are widely shared in ways that were not noticeable perhaps just five years ago.

Mahmoud had adopted two Egyptian stray puppies, which are called in Egypt “Baladi puppies,” and he let them become accommodated with his other foreign dogs – a Boxweiler dog and a Malinois dog - within his home. Later, he found out that stray dogs are easy to train, socialize with, and that they are able to recognize people’ feelings and orders like other pets and guard dogs.

“Baladi dogs are more alert than other species in recognizing dangers. If someone got closer to my home while all the other dogs are deeply asleep, the Baladi dogs are the first dogs to notice this stranger and they start barking to alert me before my Boxweiler and Maliniois do,” he explained.

On El-Geish Street, Abbassia in Cairo, there is a man who comes in his car every evening to purchase his newspaper, and bring food for stray cats and dogs. Once the stray animals see him; cats run towards him and dogs wag their tales, expressing their happiness. He has also become somewhat of a celebrity resident of this neighborhood, who spoke to Egypt Today of his love for animals.

“Feed a human for three days and he will forget you in three seconds. Feed a dog for three days and it will remember you forever,” residents who live on El-Geish Street told Egypt Today, referring to the man whose identity is unknown.

Meanwhile, the newspaper seller has apparently been impacted by the unknown man.
“I try to help stray dogs and cats as much as I can, by bringing some food and treating them mercifully,” newspaper salesman, Ali Helal, said.

“Stray dogs are immensely smart. Last month, I fell asleep during my night shift and two thieves tried to rob me. However, two stray dogs called Naema and Shabel, immediately began barking frantically to wake me up,” he explained.

Some Egyptian role models in dealing with animals

Mercy doesn’t exist among adults only, but it also exists among children as well.
“I am fascinated by cats,” Amr Mohamed, an 11-year-old boy said.

Everyday Amr feeds stray cats because they cannot always find food for themselves. Amr says he feels like a famous actor when he sees the cats that he feeds run toward him on the street.

Simultaneously, there are some Egyptian role models who try to help stray animals by placing a small bowl filled with water or food in front of their shop or let street cats and dogs sleep peacefully on the street without disturbing them.

Humans should take care of animals and treat them as they treat other people, Nagy Al Shany, a bread seller, said.

“If we compare Egyptian stray dogs with any other dogs such as German Shepherds, you will notice that other dogs cannot cross the road until someone teaches them,” he explained.

Egyptians’ mercy to animals is not limited to cats and dogs. Villagers in rural areas evidently look after their working animals and farm animals.

“I can’t hurt my donkey, as it is the main source of my livelihood, but I give it a light beating to push it to walk, as I beat up my children to force them to study. Donkeys in general are lazy and they like to stop a lot during work. Furthermore, I make sure my cattle receive a medical checkup every 6 months by bringing a veterinarian to them,” a farmer from a small village at Damietta governorate, who wished not to be named, told Egypt Today.

It would be very hard and difficult to separate a pet owner from his pet, especially when a strong and real relationship is established between them.

Mahmoud Atef, a dog trainer, has further adopted 2 street dogs called Timon and Drogo when they were only 20 days old. Originally he had intended to sell them after training them like his other dogs.

Mahmoud has tried to prove his idea that Egyptian Baladi dogs have the ability to learn and obey orders like foreign dogs. However, a strong bond was established between Mahmoud and his stray dogs, making it very difficult for him to split-up with them.

Some Egyptians also pay attention to the birds flying above them and try to establish a relationship with them.

At 7:30 a.m. every day, Seif Al Din Mohamed, a student at Cairo University, throws some seeds for birds. Seif’s relationship with these birds began when he started cleaning his birds’ cage, at which point some seeds fell to the ground and attracted wild birds.

“When I forget to put out seeds for the birds, they come knocking on my kitchen window, as if they are asking me about their breakfast. From that moment onwards, I committed myself to feeding these birds regularly,” Seif said.

Islamic teachings regarding mercy to animals are deeply rooted in the Egyptian psyche. Every Egyptian must have been told in his/her childhood famous hadiths by Prophet Mohamed, when a prostitute entered heaven for quenching the thirst of a dog, and another was punished in hellfire for locking up a cat; neither did she feed the cat nor let it fend for itself.

Egyptians have extraordinary stories which have been passed down from generation to generation for hundreds of years. One of these myths says that evil spirits possess cats.

“Animals are helpless creatures and God commands us to take care of them. If we hurt them, God would punish us. Therefore, I can’t hit animals, especially cats because devils exist in their bodies, so if we hurt them the devils in them would retaliate,” according to Bayoumi Gaber who has been a concierge at El Geish street for more than 20 years.

Other than religious teachings, many Egyptians have heard stories, especially from their parents and grandparents, about men and women who hurt helpless animals and were struck by death or disease soon after. But such stories can almost never be verified by the people who hear them, so they just take a stance on the matter, and act accordingly.