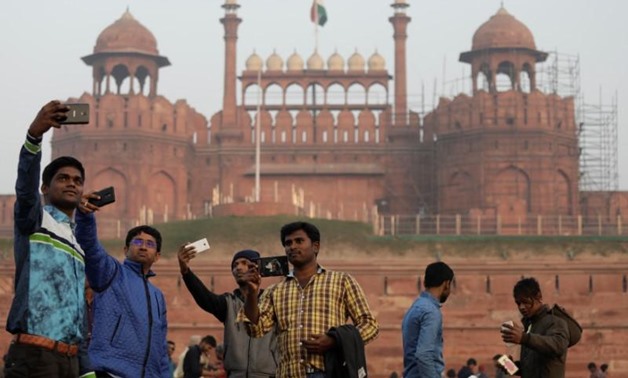 Domestic tourists take selfies in front of the historic Red Fort, one of the tourist destinations in the old quarters of Delhi, India, January 3, 2018.

NEW DELHI: India is planning to cut taxes on travel and tourism in next month’s federal budget and give more incentives to the $210 billion sector, government sources said, hoping to boost economic growth and create more jobs.

The move could add to a domestic tourism boom in the world’s second most populous nation, where low inflation and rising incomes are changing lifestyles and consumption patterns of an estimated 250 million middle-class Indians. With scores of destinations introduced on airline routes last year, air travel is also surging.

India’s tourism sector grew over 10 percent in the six months ending September, compared to near 8 percent in the year-ago period. According to an industry report, tourism employs 40 million people in India and could add 10 million jobs in a decade.

If the moves come about, companies expected to benefit include airlines like IndiGo, owned by InterGlobe Aviation (INGL.NS), and Jet Airways (JET.NS) and hotel operators such as Indian Hotels (IHTL.NS), that owns the Taj Mahal chain and EIH Ltd (EIHO.NS) that operates the Oberoi hotels in India.

In India tourists, on average, pay 30 percent tax on hotel rooms and travel compared with less than 10 percent in Singapore, Thailand and Indonesia, said Pronab Sarkar, president of the Indian Association of Tour Operators (IATO).

Another government official said the budget was likely to “significantly” raise allocations for tourism infrastructure and raise income tax exemptions on investments in new hotels.

The government will offer incentives to more regional airlines this year to cover new, under-served airports, the official added.

All three officials, who spoke on condition of anonymity, declined to provide numbers or share further details.

“We have reached a plateau point and need more resources to create new infrastructure and develop tourist packages,” Alphons later told Reuters, adding there was huge potential in developing areas that were not the usual tourist destinations.

Prime Minister Narendra Modi has said developing tourism, particularly in India’s remote north-eastern states, is one of his top priorities.

Hotel occupancy levels in India are at their highest levels since 2008, even though many hotel chains have raised prices.

The need for rooms has been spotted by foreign investors with Japan’s SoftBank Group (9984.T) backing start-ups like OYO Rooms, which has emerged as the largest aggregator of budget accommodation across the country with hotels in over 200 destinations.

One major driver of the domestic tourism boom has been the launch in 2017 of five regional budget airlines on over 100 routes, which are given incentives by the government to offer cut-price flights to uncovered and remote areas, encouraging thousands of families to explore flying for the first time.

Domestic airlines carried 10.6 million passengers in the first eleven months of 2017, up 17 percent from the year-ago period - encouraging some established players like Spicejet (SPJT.BO), Jet Airways and Vistara, a joint venture between the Tata Group and Singapore Airlines (SIAL.SI), to start flights to new locations.

Tour operators said double-digit hikes in urban wages, coupled with an over 25 percent rise in the benchmark Sensex index .BSESN last year, have contributed to the domestic tourism boom.

At the same time over 9 million foreigners visited India in the first 11 months of 2017, up 15.6 percent from a year ago.

Domestic tourists, who account for 88 percent of the sector, are increasingly using online portals for hotel and travel bookings.

Travel portal MakeMyTrip (MMYT.O) reported a 186 percent jump in hotel bookings during the September quarter and its holiday package segment that includes hotel and flight bookings, saw a 71 percent increase in revenues over the same period.

Online operators say tourism could emerge as the new engine of growth after the IT sector but that it needs government support.

“The government must lower the tax burden, ease rules and build infrastructure if it wants to ensure 15-20 percent annual growth in tourism in coming years,” said Sarkar of IATO.