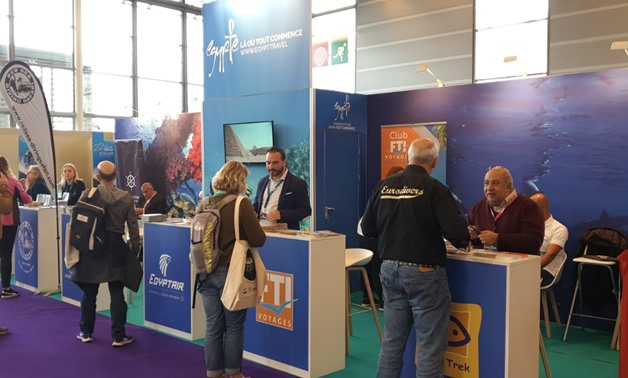 The Egyptian Pavilion at the diving exhibition in Paris - ET

CAIRO - 16 January 2020: The Ministry of Tourism and Antiquities participated in the international exhibition of diving “Salon De Plongée”, which was held in the French capital, Paris.

The participation came within the framework of the Ministry’s plan to promote tourism products that abound in the Egyptian tourist destination, especially those related to diving.

Head of the Egyptian General Authority for the Promotion of Tourism Ahmed Youssef explained that Salon De Plongée is one of the most important mass tourism exhibitions held in France, due to the French fondness for diving, stressing that the Ministry's participation this year in the exhibition comes in light of the interest in tourism promotion in the French market, which is witnessing a noticeable increase in French tourists coming to Egypt recently.

Because of its distinctive geographical location on the Red Sea Coast, Egypt is a pioneer in this type of tourism because of its comparative and competitive advantage, with the availability of the suitable infrastructure for diving tourism, where diving and water-sports centers are abundantly located in tourist resorts in Sharm El Sheikh, Dahab, Hurghada, Marsa Alam, Safaga and Taba, which organizes training courses to learn recreational diving in addition to organizing daily and weekly trips to visit diving sites near the various coasts and/or islands of Egypt.

The Egyptian pavilion at the diving exhibition witnessed a high turnout of diving enthusiasts, in addition to tourist agents, tourism companies and diving clubs interested in the Egyptian tourist destination in the French market.

The Ministry of Tourism and Antiquities participated in this exhibition with a 30 square meter pavilion, an increase of 12 square meters over last year due to the high turnout by Egyptian participants at the exhibition.

The Egyptian pavilion this year presented a number of diving centers in the Red Sea region and tourism companies specialized in ship tourism and cruises, in addition to Egypt’s national aviation company Egypt Air.

It is worth noting that this year more than 413 exhibitors participated in an area of 13,000 cubic meters of tourism companies, tourist offices and diving centers from various countries of the world.