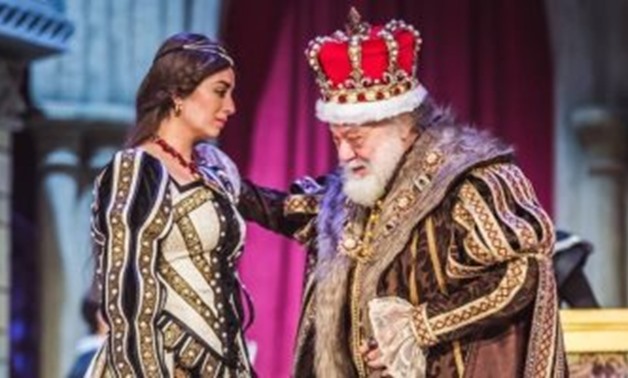 Fakharany during a scene in “King Lear” - ET

CAIRO - 23 October 2019: The General Authority for Entertainment in Saudi Arabia announced the concerts and plays to be presented within the activities of the Riyadh Season set to be held from October 24- December 15 at King Fahd Cultural Center in Riyadh.

Veteran actor Yehia el-Fakharany along with the cast of his successful play “King Lear” will head to the kingdom on Nov. 3 to stage the play for four days starting Nov. 6. Fakharany and the cast will visit the kingdom every Thursday and Friday to stage “King Lear”.

Additionally, the stars of “Masrah Masr” (Egypt’s Theater) will participate in the Riyadh Season during the period from Oct. 24 to 27.

Superstar Ahmed Mekki returns to his fans with a theatrical performance of the character "Hazalkom" that he is scheduled to perform in Saudi Arabia from Nov. 27 to 30.

Moreover, Ahmed Ezz will present for the first time a theatrical play entitled “Aladdin wel Afreet” (Aladdin and the Elf). The play will be co-starring Mohamed Saad and Tara Emad. It is directed by Magdy el-Hawari. The stars are currently undergoing rehearsals for the play to stage within the Riyadh Season from Dec. 12-15.

Last but not least, comedy star Ashraf Abdel Baki will be performing a theatrical play entitled “Garima fel Maadi” (Crime in Maadi) within the Riyadh Season. The play is scheduled for Nov. 13-16.