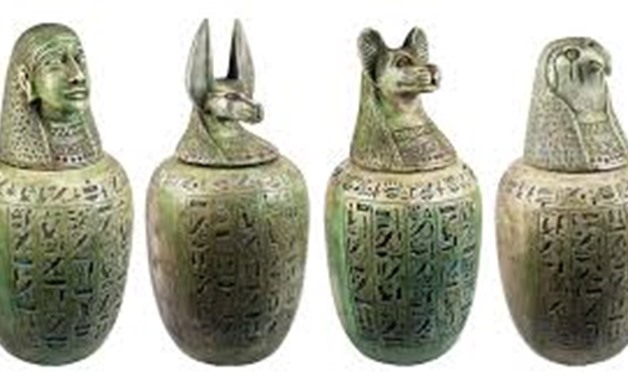 65 artifacts confiscated by police in Menia

By: Mustafa Marie
CAIRO - 20 February 2019: The security services, in coordination with the police of Tourism and Antiquities, seized an employee at the Directorate of Youth and Sports holding 65 antiquities inside his house.

Among the seized artifacts were antiquities dating back to 11th Dynasty and coins dating back to the Greek-Byzantine era. The pieces were confiscated while the man was trying to sell them to an undercover officer in the Tourism and Antiquities Police Department, who played the role of a smuggler.

Major General Mohammed al-Ghoul, director of the General Directorate of Tourism and Antiquities Police, received a notification from the director of the Tourism and Antiquities Police Department in Menia, stating that a confidential information had been received stating that a 38 year old man in Menia was trying to sell rare artifacts for LE 10 million.

When the man opened his door to receive the money, he was surprised by undercover police officers who were able to arrest the defendant and seize a statue of King Antuf VII dating back to the 11th dynasty, and numerous other artifacts in his possession.

The artifacts were confiscated and the defendant was held in detention for further investigation.