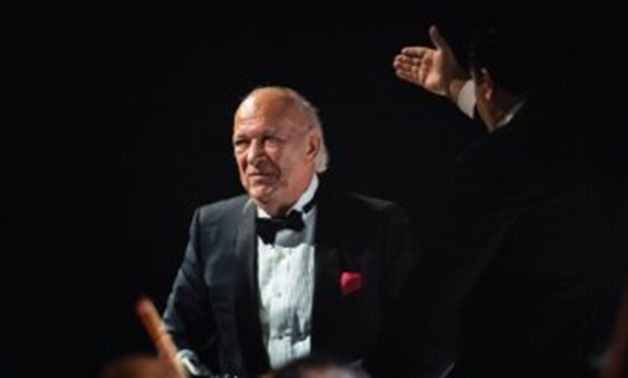 CAIRO – 14 January 2019: Saudi Arabia launched for the first time in its history the cultural and touristic festival,Winterat Tantora, which kicked off on Thursday, December 20 and will conclude on February 9, 2019.

Winter at Tantora festival which will run for seven weeks in the dazzling city of Al-Ula houses numerous programs and events.

A notable cast of Egyptian artists were keen to support this unique festival that is taking place now on Al-Ula city which is famous forits marvelousrock monuments. Khairat performed a historical concert in which he dazzled all the attendees with his music.

The Egyptian artists were keen to visit all the touristic,artistic and archaeological places in thegreat ancient Saudi city. "Tantora Festival is by all means a sign of Saudi cultural renaissance," said veteran Egyptian actor Hussein Fahmy. Fahmy added in his interview with AmrAdeeb on MBC Masr channel that Saudi Arabia is currently preparing itself to be a new innovative touristic destination, pointing out that Khairat’s first concert in Saudi Arabia served as a true ambassador of the Egyptian soft powers.

Prominent global artists are participating in the festival beside Khairat such as Mohamed Abdo, Majidael-Roumi, Renaud Capucon, Lang Lang, Andrea Bocelli and Yanni.
This is in addition to a concert that will play Um Kulthum’s songs via the hologram technology. "Tantora is a marker for the changing seasons. The Tantora, a triangular feature constructed at the upper part of a wall, is thus a sundial that has been used by the local population for hundreds of years as a marker for the start of the winter planting season," stated the festival's website.

The festival’s events will include light shows, a hot air balloon festival and the Fursan festival which will host the Custodian of the Two Holy Mosques' Endurance Cup on February 2.

Renowned musicians and singers from the National Arab Music Ensemble (AME) of Cairo Opera House performed in the Saudi capital, Riyadh, in two concerts in April 2018.


The concerts were held at the King Fahd Culture Center under the supervision of Gihan Morsy, head of the Administration for Central Eastern Music.

AME singers performed original songs for famous Egyptian singers such as Abdul Wahab, Umm Kalthoum, Abdul Halim Hafiz, Najatal-Sagheera, Chadia, among others.
The concerts followed a series of performances in the Saudi Kingdom under the auspices of Crown Prince Mohammad bin Salman to modernize Saudi Arabia.


The Crown Prince has been working vigorously to ensure that Saudi Arabia stays on course in its journey towards realizing Vision 2030, the Kingdom’s national strategy to diversify its oil-dependent economy.


In 2018, Saudi Arabia witnessed the establishment of its first opera house, the reopening of public cinemas, an increased support for contemporary arts and film across the Kingdom.

The ban on female motorists has also been removed, and concerts headlining regional and international icons were announced.

On April 5, 2018, Veteran Egyptian comedian and TV personality Ashraf Abdel Baki announced the launch of “Masrah al-Saudia” (Saudi Theatre) for the first time in two performances titled "Dunya al-Alaab" (A World of Toys) and "MamnuDokhool Al-Sittat" (Women are not allowed).

In January 2019,Baki expressed his extreme happiness with the theatrical experience he has recently gone through in Saudi Arabia, which follows the footsteps of his original experience in Egypt titled “MasrahMasr” (Egypt’s Theater).

Abdel Baky previously stated in a video he uploaded on his official Instagram account that he is currently enjoying himself in the Saudi Theater in Jeddah with a group of very talented young actors.

He encouraged fans to attend the play set to be staged on January 4-6, 2019 in Jeddah.
Furthermore, Egyptian mega star Tamer Hosny was the first Arab pop singer to perform a concert in Jeddah city in Saudi Arabia, on March 30, 2018.

The concert witnessed the attendance of thousands of Saudis, about 90 percent of which were women. Hosny performed on a massive stage, made especially where all audience seats were eitherred, white or black; the three colors of Egypt’s flag.

Bin Salman has made a plenty of steps to transfer the kingdom, which was famous for its ultra-conservative culture, to a new culturally and socially open country. He has already eased the rules pertaining to the separation of the sexes.

The Saudi Kingdom gave women the right to start their own businesses without the approval of a male relative. Rules have also been relaxed about women walking in public without a male guardian. At the beginning of February 2018, the Shura Council, the advisory body to the monarchy, demanded the country’s sports authority to establish a Saudi agency tailor made for women’s sports.

Saudi Minister for Culture and Information Awwad bin Saleh Al-Awwad previously announced that he expected the theaters to be opened in March. The Kingdom of Saudi Arabia started the screening of international children movies on Wednesday, January 17, 2018 in Jeddah.

In December 2018, the Saudi government started to issue licenses for the establishment of cinema halls for the first time in three decades, despite this, lifting the ban has been opposed by powerful religious officials, who say that films can be immoral or “open doors to evil” as per their description.

This decision strongly reflects Saudi Arabia’s desire to kick off its cinematic activities.

Saudi media previously announced that “The Emoji” and “Captain Underpants” are the first two movies selected for screening. Riyadh hosted the screening of three other movies which are “The Son of Bigfoot”, “Smurfs” and “Paddington 2”.

“The establishment of Saudi cinemas’ decision is the first step towards a strong Saudi cinema industry in the coming years,” renowned Saudi actor Mohamed Bakhsh previously said in an interview with Okaz newspaper.

“We must have a strong cinema base through the establishment of cinema institutes to enhance Saudi artists’ talents, especially since the decision of opening cinema halls needs cinema production, because most countries around the world consider cinema an independent and important industry.”

Bakhsh demanded the establishment of a Saudi media city as a base toa strong Saudi cinema industry. U.S. media paid great attention to the social and cultural change initiated by Saudi Arabia in recent months.

Bin Salman’s previous decisions were mainly dedicated to ease restrictions on women. Of his most prominent reforms is the lifting of the driving ban on women. Uber in Saudi Arabia is now looking to recruit female drivers.

Bin Salman also gave Saudi women the permission to attend the country’s national day in September 2018 in Riyadh.Additionally, women in Saudi Arabia were allowed to attend a professional football match for the first time in the country’s history on Friday, January 1, 2018.