Garage Magazine: The art of comics recreated with sophistication 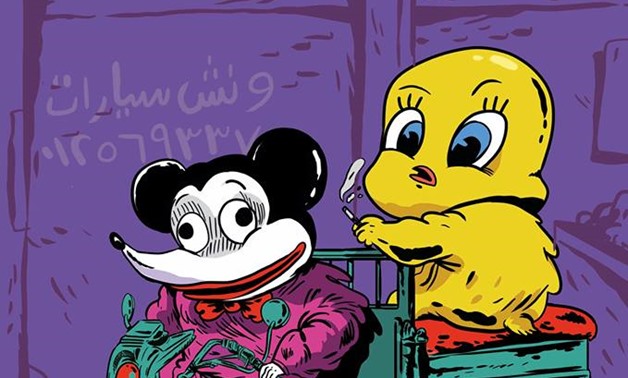 CAIRO – 25 February 2018: Heading a new direction for the art of comics in Egypt, Garage Magazine is a semiannual book of comics is founded by the well-known twin cartoonists, Mohamed El-Seht and Haitham El-Seht.

Garage Magazine is considered to be an artistic project that is a part of a larger project called “Kawkab El Rsameen” (Planet of Artists). It is a huge artistic initiative that has been taken also by Mohamed and Haitham. They both noticed several years ago the birth of a new generation of artists who have great potential but were being limited by the strict and sometimes harsh regulations of publishing houses. So the vision of “Kawakab El Rasameen” is building a sufficient platform through which artists can share their own work freely.

Comics almost require the same efforts exerted in film production as it is based on script writing, editing and designs among other technical elements, according to Mohamed one of the founders who explained to Egypt Today in an interview on Saturday.

“The main objective behind “Garage” developing the art of comics into featuring a vital value in the Egyptian artistic scene ,” Mohamed El-Seht told Egypt.

“Comics is a type of art that have a great ability to deliver more intensive messages than just directing funny and entertaining jokes to certain age groups. In the comic world, artists can aim to feature controversial topics and usually do so successfully and indirectly in an artistic and creative way,” Mohamed explained as he defined the art of comics according to his conception.

He further pointed out that as a result of the massive socio-political events that Egypt has been experiencing since January 25th revolution, people are used to interacting with limited and serious news platforms. Beside the governmental censorship that might impede socio-political comic books, fellow citizens who categorize comics as an awful sarcastic media platform, represent another censorship over such an art.


Garage has launched its second issue on Saturday at Goethe Institute in Cairo accompanied with a music performance by Egyptian band Bahgaga Band. Mohamed mentioned that in this magazine issue, all the comics are revolving around one main topic which is “conflict”. He clarified that the idea of conflict can be applied on various fields such as politics and economics.

This concept will be delivered in the issue through several main characters such as Khalafawy who will feature conflicts between social classes in Egypt and how the lower socio-economic classes specifically face different forms of oppression. On the other hand, Zizo, another main character in this issue, is a popular football player born in a local Egyptian area who will face some struggles that will cost him his popularity.

Also, in the second issue, comic artist Farid Nagy, will be presenting a story entitled “The Gray City” in which he highlights how Cairo is losing its spirit due to daily draining routine such as the city’s traffic jams among many other factors. Artist Mohamed Aly will be comparing between the animal world and the human world through his comic story “Molokhia with Rabbits” (Oriental Green Soup with Rabbits).


“Some of the characters being featured in the magazine are real people who exist and live in Egypt,” Mohamed said.

The artists, who are featuring their work in the magazine’s issue, have in fact encountered witness these characters in real life and worked with them to deliver a deep message behind their stories.

Preparing for every issue, artists from different backgrounds and countries participated in many workshops in various countries including Germany.

As Garage Magazine is being distributed in most of the Egyptian cities, the first issue has been previously distributed in several countries such as Spain, Lebanon and Morocco.

Kawkab El Rasameen seeks to create a planet of art from the varied dynamic factors found in Egyptians streets and form a cultural bridge between artists all over the world through varied interactive workshops in several countries such as Jordan and Palestine.

A comic book is a publication in which the comic art is the main element used to represent individual scenes depicting varied issues. Comics are visuals and words through which a story is portrayed like songs and films. That is why the art of comics is considered to be an astonishing form of storytelling.