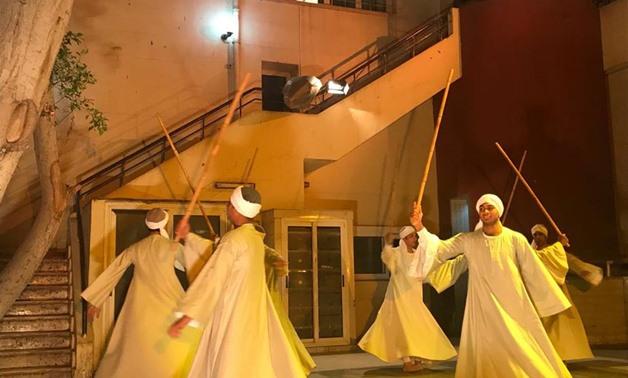 
Tahtib is of pharaonic origins, as there are frescos showing it as a training exercise done by the armies in the pharaonic age. Geretly mentioned that in the Middle Kingdom – which is clear in the frescos in old Cairo and Upper Egypt – any viewer will realize that they had the same energy and the same movements. Although he is not sure whether ancient Egyptians had a dance or not, Geretly assured there are numerous frescos all over Egypt featuring Tahtib.

“I call it ‘Fakeloric’,” Geretly the artistic founder of El Warsha company told Egypt Today in an interview expressing his disappointment due to labeling the art of Tahtib as “folkloric”, making it like a showbiz over the last fifty years. He believes that Tahtib is a powerful art that doesn’t need to be attractive.

Salama emphasized the institute’s vision, which is based on merging between the French and Egyptian cultures. The institute also aims for this fusion to be introduced internationally, especially on French stages. He also stated that places like the French Cultural institute could be a significant channel to commence such arts by rising generations.


“The fact that it is old doesn’t mean that it is not contemporary,” Geretly told Egypt Today. He clarified that Tahtib is an art that is advancing constantly. The troupe performs in “Mawlid” celebrations, the Arabic word means “birth” and it’s the annual celebration of a deceased saint according to Oxford Dictionary. They also perform in many weddings, bringing up new movements.

Gretely has also pointed out a new choreography reshaped as a result of the latest collaboration with contemporary dancer and choreographer Karima Mansour, the troupe learned a new movement and gave it the name “Karima’s Movement”.

Egypt Today has previously spoken to Mansour, who is also founder and artistic director of Cairo Contemporary Dance Center, in an

where she mentioned that Egypt is filled with potential and talent however it takes so much efforts to encourage rising artists “through allowing them to understand their bodies, new movements, and a way of life that would pave way to their actual dreams.” She said.

Geretly also pointed out that the most significant initiative that the troupe took to avoid being categorized as folkloric is collaborating with contemporary dancer and choreographer Dalia El Abd. Together they tried to find a common ground.

Although the origins are inspired by ancient Egyptians, it became a tradition commenced by Upper Egyptians, as for them there is a great honor in holding the stick, considering it a part of prestige of dignitaries.

People in Upper Egypt consider their Tahtib skills as something to be proud of, refusing to tell their own secret techniques to others. However, El Warsha managed to find an Egyptian originally from Sohag governorate, whose father was a legend in the artistic world of Tahtib, to train the troupe professionally.

Through many decades, Tahtib has been turned into a kind of dance with a stick. There are several forms of Thatib; some may look aggressive if it is practiced by men as a means of self-defense, while some Tahtib dances are less aggressive, like those practiced at celebrations and weddings.

Gretely previously directed a theatric play, “Spinning Lives”, in which he featured the art of Tahtib. Egyptian actor Sayed Ragab played the role of Abu-Zeid El Hilali, who was forced to fight against his father with the sticks in a battle, but God’s hands stop the fight.

He is the founder and artistic director of “El Warsha” (The Workshop) company. At the beginning, the company was specialized only in reviving the art of storytelling, an inherited and pervasive tradition in Egypt; however, the company then started to reintroduce other traditional forms of art, such as songs, tales and sketches, from all over Egyptian culture.