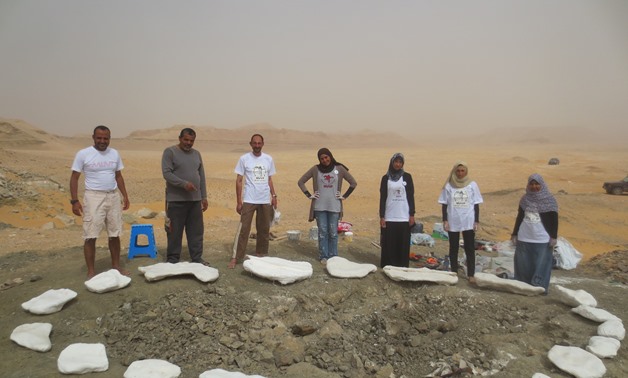 Main Caption: The all-Egyptian field team from the Mansoura University Vertebrate Paleontology initiative that found and collected the new titanosaurian dinosaur Mansourasaurus shahinae with the plaster ‘jackets’ containing the fossil skeleton at the disc

They found out that the species, named Mansourasaurus shahinae, belongs to a dinosaur group called the Titanosaurs that mostly lived in southern Europe and eastern Asia. It dates back to 100 between 66 million years ago from the late cretaceous era in Egypt, according to a study published on January 29, 2018, in the renowned scientific journal “Nature”.

History of dinosaurs in Egypt

During the cretaceous era, Egypt’s Western Desert was one of the most fertile areas in the region and attracted many organisms including dinosaurs.

After doing extensive studies, the team discovered a link between Mansourasaurus and a European dinosaur, indicating the possibility of the presence of a bridge that linked Africa and Europe millions of years ago.

This is one of the reasons as to why this discovery is particually significant; a land bridge between Europe and Africa is plausable because scientists believe that there was no land link from northern Asia and Europe to the southern bloc which modern day Africa was a part of.

“[It] offer[s] the most robust support to date of non-marine vertebrate dispersal between Africa and Europe,” according to an article published on January 29 by the Nature Ecology and Evolution website.

Speaking to Egypt Today, a team member Sanaa el-Sayed explains more details about the discovery and how the study of vertebrate paleontology works in Egypt.

In the below lines, the transcript of the interview

Could you tell us more about the process of the discovery?

Well, we are a research team at the Mansoura University Vertebrate Paleontology center (MUVP). We have been excavating for dinosaurs’ fossils since 2008 in Sahara Desert oases particularly; we know that this region has lots of vertebrate fossils such as whales, dinosaurs etc. So, we have travelled a lot to this region in the recent years to excavate for these fossils until we found Mansourasaurus in 2013. It was the first time for us to find a nearly total skeleton of a dinosaur. At first, we did not recognize its genus. We started extracting it in March 2014. From 2014 to 2018, we have worked on preparing the samples for the study. It is considered a noteworthy discovery as this genus is very rare across world, and it is the most complete terrestrial vertebrate discovered in Africa.

Which parts of the dinosaur’s skeleton did you find? And are there any missing parts?

The scientists found parts of its skull, lower jaw, neck and back vertebrae, ribs, shoulder and forelimb, back foot and osteoderms, which were enough to help us draw the imaginative image of the dinosaur and help us to know its genus.

Skeletal reconstruction of the new titanosaurian dinosaur Mansourasaurus found in Egypt. Bones shown in color are those that are preserved in the original fossil; other bones are based on those of closely related dinosaurs - Carnegie Museum of Natural History / Andrew McAfee


What techniques have you used to study this discovery?

To extract the fossils, we have used very simple tools such as digging materials including a geology hammer and a certain kind of tincture to protect the fossil from breaking up. To carry the fossils and transfer them to Mansoura University for the study, the fossil’s parts are wrapped in gypsum and a piece of cloth. Although they are primitive tools, they are the most suitable tools to extract fossils and are used across world not only in Egypt.

Upon transferring the fossil to the center, we use CT scans at the university’s hospital with its plaster jacket of gypsum to compare the bones’ shape to those of other species. So, we later found out that it is compliment to the species of Mansourasaurus based on the shape of its bones.


After studying it, will it be moved to a museum?

No, actually it will remain at the paleontology center.

Where is the paleontology headed to in the future in Egypt?

Paleontology is very famous science in Egypt and there are many professors specialized in this field, yet vertebrate paleontology such as whales and dinosaurs is at its first phase in Egypt and we do not have many professors specialized in this field. The highest science degree in vertebrate fossils in Egypt is done by Dr. Hesham Sallam.

Does this mean that we will find more vertebrate fossils in the future?

Of course, Egypt is rich with vertebrate fossils not only dinosaurs, but also mammals and many other kinds of vertebrate animals.

Did you try to dig for more fossils in other governorates?

Yes, we usually excavate for fossils in Fayoum, the Western Desert and in southern regions such as Dakhla and the Kharga Oasis. These are the places where most of fossils in Egypt can be found.

Most of the team are composed of girls, what are the challenges have you faced?

At the beginning, whether me or the other girls in the team found it difficult in convincing our parents to go to the desert to excavate for fossils, but when they find how much we love the work they allow us. When I decided to enter this field, I did not think about society not accepting it until people begin to be astonished upon hearing about my work. Also, many student girls at the university told me that they wish to follow my steps, yet their parents do not allow them. Since then, I have valued what I do and my parents’ encouragement.