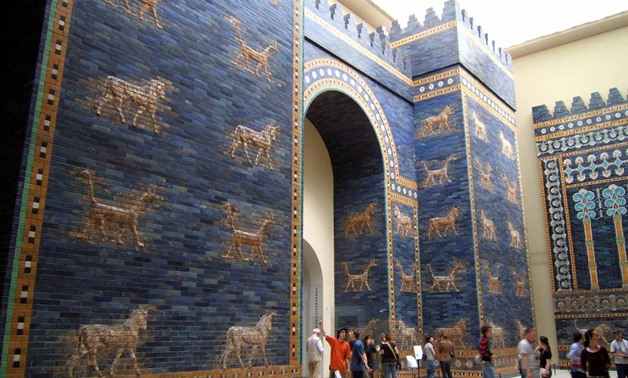 Ishtar Gate at Museum of Berlin – Photo Courtesy of Wikipedia

CAIRO – 16 January 2018: The Arab civilization presented to the world models of how to adapt to harsh life conditions. The Mesopotamian civilization introduced the concepts of agriculture to the world, and also used early religious concepts to explain the universe.

Today, we will shed light on one of the greatest goddesses in Arab history.

Ishtar’s early name was Inanna, and she was worshiped for the first time in the Sumer lands (south of Iraq). She was the goddess of love, beauty, marriage, desire, fertility, war, justice and political powers. She was worshiped in different Mesopotamian areas and periods such as Akkadians, and Babylonians, according to the Encyclopedia Britannica.

She is also considered as the queen of the heavens; an eight-pointed star was her symbol. Some manifestations explained that she is the daughter of the god of the crescent moon, and the sister of the god of the sun Shamash, and they all together formed the sacred trinity of the sky in Mesopotamian mythology.

The eight pointed star of Ishtar, the Solar disk of Ishtar's brother god Shamash, and the crescent of her father Sin – Photo Courtesy of Wikipedia

Ishtar also indicated feminine characteristics, physically and emotionally, so she loved, betrayed, talked, danced, laughed, deceived, married and beautified the whole universe and the sky, according to the Iraqi author and researcher Zaid Khaldon Gamil.

Her story is connected to one of the greatest love stories in ancient mythology with god Tammuz, the god of river. She loved him intensely and after their marriage, he died but she kept searching for him. Eventually she found him in the underworld, and brought Tammuz back to life.

Ishtar’s story is close to the Isis and Osiris myth and how Isis did her best to find her husband's body and reunify it, according to prominent Egyptologist and author Zahi Hawas.