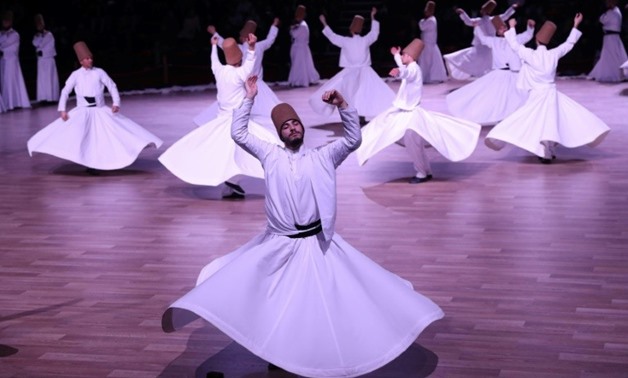 Arms crossed over their hearts, hands resting on their shoulders, the dervishes start their dance. They turn on themselves, slowly sliding their hands along their bodies before raising them, embracing the universe.

But far from being only an act of introvert worship, the dance of the whirling dervishes is now a huge spectacle in Turkey, attracting flocks of tourists every year.

Every December, the Turkish city of Konya organises 10 days of celebrations to commemorate the death on December 17, 1273, of Jalal ud-Din Muhammad Rumi, the Sufi mystic who is one of the world's most beloved poets.

It was Rumi's followers who founded the brotherhood of whirling dervishes, so-called for the trance-like dance which is a central part of their worship.

The Mevlana museum ("our master", a title given to Rumi) in Konya -- which houses his tomb -- was the most visited museum in Turkey with 2.43 million visitors, well ahead of Topkapi museum (1.46 million) and the Hagia Sofia (1.43 million), both in Istanbul.

Abdussettar Yarar, director of Konya Culture and Tourism, hopes to do even better this year. During the celebrations between December 7 and 17, between 60-65,000 people came to watch the "Sema" (the dervishes' dance), around 10,000 more than last year, he said.

But the figures do not include the visitors to the museum and other events -- conferences, plays, exhibitions -- organised in the city.

These figures increase each year, Yarar said, thanks to promotional efforts by Turkish cultural and tourist authorities at fairs and exhibitions around the world.

After the dissolution of the Ottoman Empire and the establishment of the secular Turkish Republic, the fraternities were officially banned in Turkey in 1925.

This led to the closure of the "tekke" (dervish lodges) around the country. But many were later reopened as museums, as was the case in Konya.

The authorities also allowed the whirling dervish ceremonies to resume in the 1950s, recognising their cultural value and potential in terms of tourism.

The silhouette of the whirling dervishes with their long white outfit and their tall cap -- one hand pointed towards the sky and another towards the earth -- has become one of the most famous symbols of Turkey.

The audience watched entranced at a dance which copies the movement of planets against a background of Sufi music that filled the large Konya Sports and Congress Centre.

"A lot of people like his poetry because it comes from the heart, from his soul. And in his soul, he was with Allah," said Andrey Zhuravlyov who came from Latvia for the third time.

At Rumi's mausoleum -- recognisable by its turquoise-tiled dome -- tourists jostle each other, reflect deeply and some weep profusely at the tomb of the poet.

"Each time I visit, I feel different emotions," said Alper Ali Atik, adding the first time he visited, he left with a better understanding of human beings and how to be close to others.

- 'Different feeling' -
Rumi was born in 1207 in the town of Balkh in the northwest of modern day Afghanistan. He wrote mainly in Persian, but also in other languages including in Arabic, and died in Konya.

This has left Afghans, Iranians and Turks over the years claiming him as theirs, although some prefer to stress he left a legacy for all humanity.

Around 10 percent of tourists visiting Konya for the celebrations in December are foreigners, above all, Iranians, Yarar said.

This is the case for Maryam, an Iranian who previously visited Istanbul and the Mediterranean resort of Antalya, but finds in Konya, "there is a different feeling".

Her compatriot Shams added that she really loves the Mevlana. "He is a great Iranian poet," she said, with a big smile.

"When we say Konya, we think of Mevlana and when we say Mevlana, Konya comes to mind," Yarar said.

Murat Cengiz, a tourist guide for almost 20 years, has seen growing interest in this Sufi mystic, whom he believes impacts more than just Muslims and Turks.

It is an opportunity, he said, "for the protection of the heritage and the development of Konya".

In front of the museum's shadirvan (ablution fountain), Chinese tourists take a photo.

"It's very beautiful, a feeling that I cannot describe," enthuses Sally, who is on holiday from Beijing.