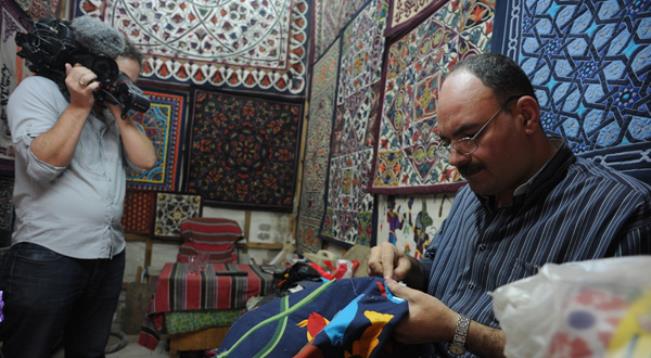 The Luxor African Film Festival launches its fifth edition with a selection of African films and music.

The Luxor African Film Festival (LAFF) is returning for the fifth consecutive year across the heart of our South, with the support of the Egyptian Ministries of Culture, Tourism and Foreign Affairs. Becoming the annual vision and sound of African film and music, the festival, which runs March 17-23, shows 200 African-themed contemporary films while featuring art galleries, music performances, film workshops and more. The opening ceremony was held at Luxor Temple, while the daily screenings are at the Luxor Conference Hall, its library and its culture palace.

This year, Cote d’Ivoire is the honorary guest country, in the context of its celebration of 50 years of cinema. The festival has chosen to give a tribute to the name of the late and great Ivoirian filmmaker Henri Duparc, considered a master of African comedy because of his depiction of post-independence African societies with humor, irony and tenderness. LAFF will show two classic Duparc films: the first is Bal Poussière (Dancing in the Dust, 1989) that starred Bamba Bakari as the chief of an African village who already has five wives yet decides to find himself a sixth one. The second Duparc film is The Sixth Finger starring Jean Carmet and Patrick Chesnay and telling the story of a couple who have a baby born with six fingers on each hand, which means, according to some old traditions, that he must be sacrificed. The honorary award was received on the opening ceremony by Henriette Duparc, Henri Dupar’s wife and frequent film collaborator.

The opening ceremony also featured tributes to other two African masters: Senegalese filmmaker Safi Faye and Burkinabe filmmaker Gaston Kaboré. Egyptian star Menna Shalaby will not only receive a similar tribute, she will also present the opening film Nawara by Hala Khalil. Shalaby received Best Actress Award from the latest edition of Dubai International Film Festival for her turn as the title character. Ivoirian band Djarabikan, whose name is taken from a Malinke word that means “the voice of love” and whose original Afro- Jazz sounds have earned them awards and trophies worldwide, will perform on both the opening and closing ceremonies.

The Ivorian band Djarabikan is set to perform at the opening and closing ceremonies.[/caption]

The Long Narrative Competition is set to feature 13 films including the new Egyptian drama Before the Summer Crowds, the latest film by veteran director Mohamed Khan. Set in a seaside resort, the film stars Hana Sheha as a beautiful young woman who spends the summer vacation on the seashore and meets a variety of funny people. Also showing as part of the Long Narrative Competition is the Nigerian production Mona by Anthony Abuah, which takes place in 1973 right after the Portuguese army in Mozambique murdered 400 civilians. A female assassin called Mona (Marlene Abuah) decides to take revenge on the Portuguese prime minister during his state visit to London. The jury of this competition includes Egyptian director Khaled El-Hagar and Moroccan star Driss El-Rokh.

The new Egyptian drama Before the Summer Clouds.[/caption]

The Long Documentary Competition will also feature 13 films from 13 African countries. Among them is Sembene! that tells the unbelievable true story of the father of African cinema Ousmane Sembéne, the self-taught novelist and filmmaker who fought against enormous odds in a monumental fifty-year battle to bring African stories to Africans. The film is told through the experiences of the man who knew him best, colleague and biographer Samba Gadjigo with rare archival footage and exclusive materials. The jury of this competition includes Egyptian director Magdy Ahmed Aly and film producer Pedro Pimenta from Mozambique.

From Cote d’Ivoire, an acclaimed short film called Djibada will be screened among the films competing in the Short Film Competition. The short narrative is written and directed by Mho Diaby who tells the story of a painter suffering from a mysterious illness that keeps him from creating new artworks. When he goes to pray near a shrine, Richard meets Ayana, a young woman who came to present a sacrifice.

This year, the festival decided to launch a short competition for African-born film students around the world. Around 20 films will be screened in this new competition. Both the Short Film Competition and Student Competition will feature one jury with five members including Dr. Malek Khoury, professor of film at the American University in Cairo, and Egyptian director Sherif El-Bendary.

Focusing on human rights issues, the international Freedom Competition will feature the Egyptian premiere of The Tentmakers of Cairo by Australian director Kim Beamish who focuses on the daily routines and personal stories in Khayamiya.

Over the past five years, LAFF has provided a new opportunity for Egypt to reunite with other African countries by signing more than 25 collaboration agreements and protocols with leading African festivals like FESPACO in Burkina Faso and JCC in Carthage, and leading organizations like Arterial. LAFF also won appreciation awards including African Vision Award from the Agora Lumière Organization and a special award from the Hollywood Foreign Press Association (HFPA), the organizer of the Golden Globes Awards in the US.