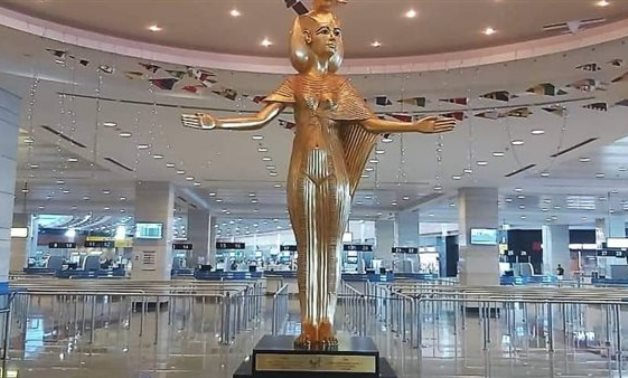 CAIRO – 30 June 2022: The Ministry of Tourism and Antiquities, represented by the General Egyptian Tourism Promotion Authority, placed a number of archaeological reproductions of the statue of the ancient Egyptian goddess Serket in the airports of various Egyptian tourist cities, standing with her arms open and welcoming visitors.

CEO of the General Egyptian Tourism Promotion Authority Amr el-Qady explained that these clones are produced by the Kunouz Factory for Archaeological Reproductions, pointing out that a total of seven statues will be placed at the airports of touristic cities. Three of them have been placed in the arrival halls of Terminals 1, 2 and 3 at Cairo International Airport. The rest of the statues are being placed in the airports of Sharm El-Sheikh, Hurghada, Luxor, and Aswan.

He added that a brief summary about the ancient Egyptian goddess Serket was placed on the statue’s base, and the phrase "Welcome to Egypt" in both Arabic and English.

Walid Hussein, director general of exhibitions and events at the authority, indicated that the process of manufacturing the statue and the base took about a month. It is made of gilded fiberglass and is three meters in height. The base is black marble and is 1 meter in height.

It is worth noting that the goddess Serket is one of the four protective deities of ancient Egypt. Her role resumed until the end of ancient Egyptian history. She was often depicted in the form of a standing woman with a scorpion on her head.