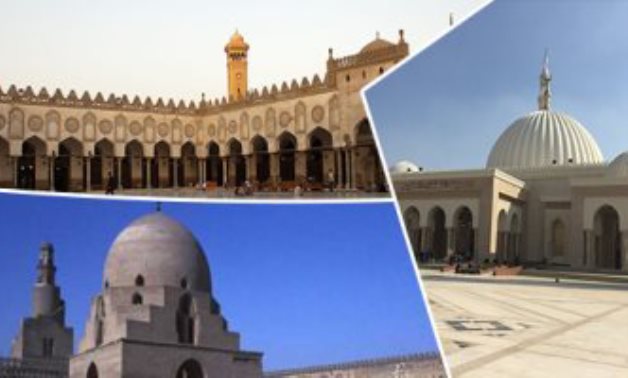 CAIRO – 4 May 2021: Al-Azhar Mosque is one of the oldest and most important mosques in Egypt and the Arab world. It is considered a source for enlightenment and the largest religious institution in the entire Islamic world.

The cornerstone of Al-Azhar Mosque was laid on Ramadan 14, 359 AH - 970 AD. The mosque was built in the month of Ramadan in the year 361 AH - 972 AD. The construction of Al-Azhar began with an order from Jawhar al-Saqli on April 4, 970, after he was ordered to do so by the Fatimid Caliph al-Muizz Li Din Allah.

Jawhar al-Saqli was the most important and famous leader in Fatimid history, as he was the founder of the city of Cairo.

It took two years to build Al-Azhar Mosque. It was named Al-Azhar Mosque, after the Lady Fatima al-Zahra, to whom the Fatimids are attributed. In the year 378 AH / 988 CE, Caliph Al-Aziz Billah made it a university to teach the esoteric sciences of Ismailism for scholars from Africa and Asia.

Al-Azhar Mosque spans over an area of 12,000 square meters. The mosque contains more than 380 columns of beautiful marble whose crowns were brought from ancient Egyptian temples. Al-Azhar was neglected during the rule of the Ayyubid Dynasty of Egypt, after Salah al-Din al-Ayyubi overthrew the Fatimids in 1171.

Salah al-Din was hostile towards the teachings that were put forward at Al-Azhar during the Fatimid Caliphate. Prayer at Al-Azhar was interrupted for nearly a century by Salah al-Din, who invalidated the sermon at Al-Azhar Mosque, which was a stronghold of the Ismaili Shiites.

On December 17, 1267, Friday prayers were held for the first time at Al-Azhar Mosque during the reign of Al-Zahir Baybars, Sultan of Egypt at the time.