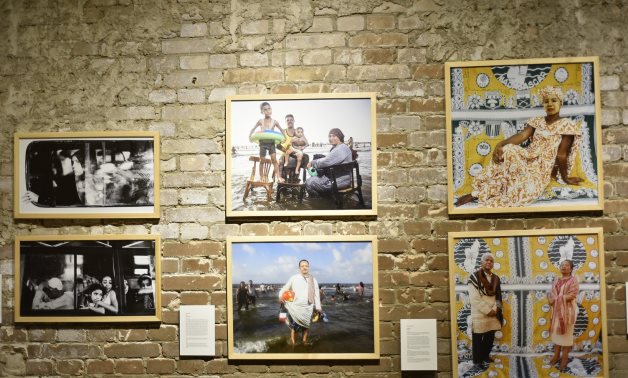 CAIRO – 30 March 2021: Get on your business game, diversify your work, change your perspective rather than your lens, and be curious. These are some of the best photographer advice that came out of Cairo Photo Week, which exhibited the work of and connected hundreds of photographers in mid-March.

The advice can work for an entrepreneur, too, which is exactly what many photographers are. That is how Marwa Abou Leila, cofounder of Photopia and organizer of the festival, started off shifting her career in her mid-thirties to answer to a serious demand in Egypt: a photography school.

Sitting in the beautifully renovated building of Consoleya, formerly the French consulate, which was acquired and rehabilitated by Ismailia Company among other landmarks in downtown dedicated to the event for free, Abou Leila discussed how the 2021 festival differs from the first edition two years ago. “The cooperation with the U.S. embassy is a leap because Americans are some of the best photographers in the world. The program is 30 percent bigger than last year, and exhibitions, mostly from the MENA region, are significantly more,” Abou Leila said.

Exhibitions at Cairo Photo Week received much praise from participants. Kunze said the exhibitions were “world-class,” and U.S. ambassador Jonathon R. Cohen said during the inauguration of the festival that “anyone in the world would feel a connection to this exhibition.” The largest event of its kind in the Middle East, which had 20 local and international partners, offered numerous workshops and masterclasses with more than 90 Keynote speakers and instructors, as well as 11 Exhibitions of 100 Exhibitors. Abou Leila plans to seek funding for the next festival to live stream the workshops.

What it means to be a photographer

“Photography is about giving voice. It is not about us; it is about the person in the picture or what is going on in the picture. A picture that resonates to people, or they can see themselves in the picture, or shows us how much we have in common, or offers solution or hope. That is when a photograph is effective,” Steber said.

Steber recalled a picture she took during food riots in Haiti of a boy trying to steal food aid while armed soldiers were going after him with batons in their hands. She won an award in 1987 for her years of work in Haiti, which translated the tense situation in the Caribbean country at the time.

But a photographer does not have to cover turmoil or anything dramatic. They just have to be “curious and interested,” Maggie said, adding that just listening to somebody you do not know may generate a great story.

“Anytime you can take a local story and tie it to a larger idea… perhaps women are trying to move forward in a little village, trying to change things for women which can be tied to this international idea. Sometimes a little story, you connect it to something universal,” Steber said.

Steber took pictures of her ageing mother as she was going through memory loss, and she has since received many emails from people who were touched by the project, whether or not they went through something similar with a family member.

Another way to beat the familiarity around a photographer is to literally play with the camera and take pictures from different perspectives as if you’re seeing the world from a dog or a cat’s eyes. It would be like “falling in love again,” according to Steber. Acclaimed photojournalist from Bangladesh Shahidul Alam, 66, shares Steber’s sentiment in that a photographer does not have to think of “faraway, dramatic things” to capture.

“Ordinary human conditions are a very important subject to understand and translate, and not many of us do that. We are witnesses of our time,” Alam said.

“Turning the lens around and see what’s exceptional within what’s perceived to be ordinary,” he added, highlighting that he works only a few kilometers from home.

A mosque is a very ordinary thing in Bangladesh. But to take pictures inside the mosque, that was a venture that some people in his town were against. At the end of the day, there are some Muslims who believe pictures are haram. Inside a mosque in Bangladesh - Shahidul Alam

However, Alam managed to take pictures of everyday activities in the mosque: the praying, the old man reading Quran or counting his prayers on prayer beads, the playing or sleeping children and other little children trying to prostrate correctly.

Not only was the project progressive in Bangladesh, but the series of pictures contributed to fighting Islamophobia. It was his intention to show that a mosque is many ways what Prophet Mohamed intended it to be, a place for worship, education, a meeting point, a shelter, and an exhibition space, Alam said.

Are you a photographer in Egypt? You’re in luck.

Both Shamayim Shacaro and Felix Kunze said their favorite pictures have been in Egypt. That’s not a coincidence.

In 2018/2019, Kunze was in “the middle of nowhere,” or that is what he thought, as part of an archeological dig with Yale University in Elkab, an area between Edfu and Luxor.

“And this guy turns up on a motorbike with some tea; we sat down and took a break. He had the local dress and he was this really wonderful example of the local people. A photograph in the wadi with the beautiful rocks, something in that was so true and honest… We are setting up scenarios and something real happens and it’s magic,” Kunze recalled.

For his part, Shacaro said his first shoot in Egypt in 2015 is his favorite because he wanted to “showcase how beautiful and remarkable the culture of Egypt is, especially to American people, for them to see Egypt that the way I see Egypt. Because in our media, many times we have a one-dimensional perspective of the MENA. So, to be able to show another side, a beautiful side was a privilege for me.” Shacaro showed passionate interest in Egypt as he spoke the ways Egypt inspires him as a photographer.

“There are so many vast levels of inspiration, every turn, every corner could be a totally different project. I could be standing in this corner right here, turn left and have one concept, turn right have a completely different concept. And then there’s going to be some kid on a motorcycle who is going to ride by and create something totally different,” he said.

“Every angle that the sun is creates a different narrative in Egypt that I cannot find anywhere else in the world, and I have been to a lot of places,” he added.

As a fashion photographer, understandably he found inspiration outside of Cairo and more among Bedouin tribes and Nubian tribes because he wanted to showcase something that is different from the stereotypical Egyptian experience.

In the Black Desert in Western Egypt, “I saw many women there who had beautiful colors of garments that they personally dyed, and they were using the shells of beetles to create the dye for their garments and I found that absolutely incredible… I saw them make it and I had such appreciation for after watching the way that it was processed,” Shacaro continued.

There are “many layers of cultures” in Egypt that can inspire any photographer, according to Shacaro. To him, everything that incorporates clothing that tells a narrative complementing the brand of a client is fashion photography.

“It’s always wonderful to be able to see a natural lifestyle and be able to incorporate that into what we do without degrading it or stealing from it but adding to it.”

It’s like creating an “amalgamation of different cultures” to create something new, such as incorporating the Bedouin style and fisherman style in Egypt in a way that complements both cultures without disrespecting either of them. Finally, here are some advice from Shacaro and Kunze for aspiring photographers:

1 – Learn the business side of the creative arts so you manage and control your business and money.

2 – If you’ll study, study business, not photography. You can learn photography by observing.

3 – Experiment with a 50ml fixed lens; it is a good, cheap learning tool to start with constraint, as artists work well when they solve problems.

4 – Travel as much as possible and network with as many people as possible to see professionals do things in different regions and markets so you incorporate them into your work.

5 – Incorporate all elements in one picture so a viewer would know how it would feel like to be in that place. It’s a nice challenge.