Minister of Communications Amr Talaat during the Luncheon

By: Hanan Mohamed
CAIRO - 21 February 2019: The year 2018 was a significant year for Egypt’s Information and Communications Technology (ICT) sector, where it was awarded membership in the Administrative Council of the International Telecommunication Union. Also, the contribution of ICT to the gross domestic product (GDP) grew 14 percent year-on-year in FY2017-18 compared with FY2016-17. In line with Egypt’s vision to attract foreign investment and rebuild the Egyptian citizen, Egyptian Minister of Communications and Information Technology Amr Talaat announced his ministry’s strategy during the three years and stating the current figures of ICT sector at American Chamber monthly luncheon meeting.

In 2018, Egypt’s exports reached $2.5 billion in one year, growing 38 percent in investments in the sector, from LE 15 billion to LE 21.28 billion, according to Talaat, noting that the rate is high, but the number is still small.Egypt has also been elected President of the ITU’s Telecom Council for the upcoming two years, and the council’s next conference will be held in Sharm El-Sheikh as opposed to Switzerland’s Geneva, where conferences are usually held. Moreover, in the first quarter of fiscal year 2018-19, the sector grew 18.4 percent, with a strong potential for further growth.

The minister stated that his entity is targeting a 15 percent growth rate for the whole year, upgrading the targeted rate from 14 percent after achieving a high rate in the July-September period. “The reason behind focusing on this growth rate is due to the increased contribution of the ICT sector in Egypt’s GDP,”the minister said.It stood at 3.2 percent during the previous fiscal year, and the target is to reach 4 percent this year, potentially further growing to 5 percent within the three years that the strategy is covering.

On a job creation basis, the minister announced plans to create 100,000 more jobs until 2022 in the ICT’s export business, stating that the number of employees in the sectorhas risen 13 percent y-o-y to about 175,000.“The good thing about ICT, when it comes to exportation, is that stability is very high because it is not vulnerable to volatile circumstances, as is the case with other sectors. Also, the main cost of ICT services is the human cost, while the rest is all value,” the minister said.He further argued that the achieved value in ICT cannot be matched in other sectors, which is why the government is focusing on increasing exports in this sector.

“Our plan is to grow 55 percent of Egypt’s export and to have centers or free licenses in the state that export outside the country,” the minister stated, adding that the number of free licenses is expanding and that the ministry is trying to expand and strength them further. “We have 25 percent that we need to bring in investments of international companies to set up centers in Egypt, depending on Egypt’s market potential.”To bring these investments to Egypt, the ministry put a strategy that stands on two main pillars; one is human development and the second is a digital transformation for creating a digital economy in Egypt.

By tackling the first pillar—human development—the government is trying to capitalize on building an ecosystem that encourages innovation and entrepreneurship, strengthening skills and expanding Egypt’s skilled labor force.The second element is the infrastructure and improving telecom infrastructure. “We want to make sure to brand Egypt as a country that is still at the forefront and still attractive for companies to invest in,” Talaat said.The third element is incentivizing investors.With human development, it’s about strengthening and expanding digital skills, innovation and entrepreneurship, and digital content, in addition to how ICT could develop the health sector and opportunities for people with disabilities.

As for digital skills, the ministry currently trains 3,600 new trainees every year, with aspirations to train 45,000 within the upcoming three years, through three main streams, include training and improving the ICT skills of young people even before their graduation, whether during their university stages or even high school stage.The primary initiative on this front is the ministry’s Massar Initiative, where older professionals are partnered with younger ones to guide them. Another similar effort launched by the ministry is youth lending program Wazzifa-Tak that will launch this year in cooperation with Nasser Bank.

The ministry is also launching another new initiative: A digital platform with life lectures on specialized ICT subjects, such as cyber-security, data science, artificial intelligence and so forth. The program will launch in the first quarter of 2019, according to Talaat.

Another initiative is digital gaming, in which the ministry intends to train 10,000 Egyptian and Africans on digital gaming during the span of three years. The program’s aim is to launch 100 new companies through the newly trained calibers.

“Egypt is about assume the chairmanship of the African Union. As a government, we are taking it very seriously, and we believe it is an excellent opportunity for Egypt to announce its comeback to Africa. This initiative is one of the early fruits of this comeback,” Talaat contends.The minister further touched on one of the challenges of the capacity building, saying that it is the primary specialization to focus on. “That’s why the government has set a strategy focused on certain disciplines and specializations in ICT that the government thinks there is a competitive edge for Egypt to achieve,” the minister explained.

He announced that the government is looking to increase the number of individuals specialized in sub-sections that are seeing high levels of demand, “We are working to increase the number and volume of initiatives in these fields and disciplines, including digital gaming, data science, blockchain and artificial intelligence.”The ministry is also reportedly working to set a strategy for artificial intelligence (AI).

Also, Egypt is working to set up the first Faculty of Artificial Intelligence in Egypt within the upcoming academic year, and several departments in this academic field are also slated to be set up at other institutions. The ministry is working on six other initiatives as well to support entrepreneurship, namely Fekrtak Sherkatk, Innovation lab, Egypt Post, Technology Innovation Clusters, Tech Ports, and Inclusion initiatives.Since the launch of Fekrtak Sherkatk in September 2018, 4,000 applications were received through the digital platform and 665 start-ups interviewed.

In collaboration with the United Nations (UN), the first innovation lab of its kind in Africa is scheduled to be set up in Cairo’s smart village. As for the third initiative, Egypt Post, it is part of a major transformation where one of its roles will be microfinancing. As for the Technology Innovation Clusters, they are currently being built in eight universities in various governorates including Upper Egypt, Menoufiya, Zagazig and Mansoura.

“These hubs have several roles that come into play as they include education centers, innovation and ideation camps and incubators; they also work to create a very important ecosystem efficient for what exists in the world as it’s time for Egypt to embark, which is the relationship between academia and business. The idea is to encourage the businesses in each of these governorates to address universities regionally with their business problems,” he said.

The fifth initiative is Tech ports. Egypt has tech ports in prominent and strategic areas including Asyut, Borg al-Arab, Sadat City and Beni Seuf. “We have agreed with Ministry of Investment to turn them into free zones and to have tax reductions on investments there.”He also pointed to Knowledge City, a mega project and tech port that the ICT is working on currently being built at the New Capital. It is built on a land plot of 130 feddans at the heart of the New Administrative Capital.

The second pillar—digital economy—comes as a part of the ministry’s role and responsibility to activate and build projects to realize a digital economy. As for infrastructure, the ministry is working to strengthen the collectivity capabilities, turning to the highest broadband records and attracting international internet providers to invest in Egypt and set up local data centers. The minister noted that most companies are providing their internet services from other countries.

Under the umbrella of having a digital government and offering digital public services to the public, the ministry is planning to launch around 25 digital public services during the current year. It will start with Port Said, before spreading all over the country. These services include notarization, renewing driving licenses, utilities and electricity, municipalities, Agriculture and Marriage officiants. On how to be transformed into digital government, Talaat gave examples of digital transformation projects to automate governmental agencies including digitizing processes like the E-Visa, Endowed Asset Management, Farmer’s Card, Law Enforcement, Health Insurance, and more.

The minister also reviewed the geographical information system (GIS), which is Egypt’s map of data about each sector and the service pertaining to its particular locations, including: Tourist attractions, endowments, agricultural roads, services, buildings and even roads.

Unified citizen cards and manufacturing electronics are also projects that the ministry is planning to issue during the upcoming period. Talaat explained that citizens will use this card in all their financial deals and transactions. The main objective of this card is the financial inclusion of 20 million citizens entering the legal system of financial services. Manufacturing electronics comes in line with heightened efforts to use modern-day technologies such as tablets in the educational process.

According to Talaat, the government is working to manufacture a tablet with a 50 percent local component.

The minister ended his speech referencing the legislative reforms that Egypt conducted during the last period, including Egypt’s consumer protection law, cyber crime law and the intellectual property rights law, adding that it’s time to have data protection law that is approved by the cabinet, and that the government is currently working on an e-commerce bill law. 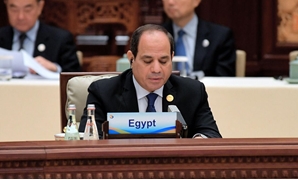