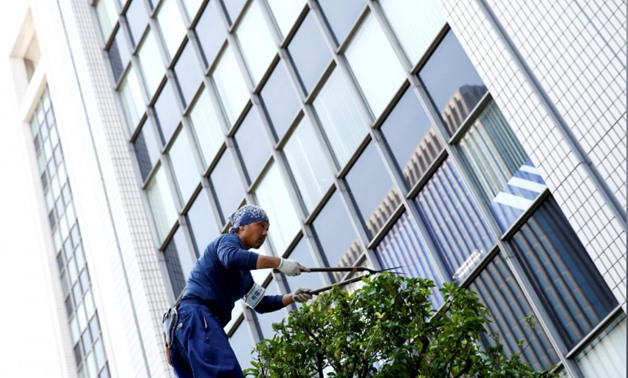 FILE PHOTO: A worker cuts a tree in front of an office building at a business district in Tokyo, Japan, May 18, 2016. REUTERS/Thomas Peter/File Photo

By: Reuters
TOKYO - 20 February 2018: More than half of Japan’s companies do not plan to raise base pay in annual wage talks in coming months, a set back for the prime minister and the country’s main business lobby which has called for wage rises of 3 percent to fuel an economic revival.

In a monthly Reuters Corporate Survey, just less than half said they would raise pay and most in this group said the increase would be similar to last year’s level of about 2 percent.

Prime Minister Shinzo Abe and the Keidanren business group have sought a 3 percent wage rise to encourage consumption and inflation, key elements of Abe’s bid to vanquish the country of years of deflation.

A rise in fourth-quarter GDP reported last week marked Japan’s longest continuous economic expansion since the 1980s but significant wage rises remain elusive even though the labor market is its tightest in about four decades.

In the past four years, major companies agreed to raise wages about 2 percent at annual wage negotiations with labor unions, a benchmark that sets the tone for talks across the country.

The bulk of that - about 1.8 percent - comes automatically under Japan’s seniority-based employment system. Anything beyond that is a hike in “base pay.”

But many firms are wary of raising wages as it commits them to higher fixed personnel costs, so they prefer to pay one-off bonuses instead.

The survey was conducted between Jan 31 and Feb 14 on behalf of Reuters by Nikkei Research. Of some 240 companies that responded, 52 percent said they would not raise base pay.

“It would leave a burden when the business environment turns for the worse,” wrote a manager at a transport equipment maker in the survey.

The firms intending to boost wages cited returning a portion of profits to employees and motivating workers. Some even cited government pressure.

“We have no choice but to raise base pay because of policies by the government and Keidanren,” wrote a manager of another transport equipment firm.

In Japan, base salary accounts for the bulk of monthly wages. Rises in base pay had been virtually frozen since the early 2000s amid persistent deflation.

Several economists have forecast major companies would agree this year to base pay increases of around 0.5-0.6 percent, which with the seniority-based automatic salary rise would bring overall wage growth to around 2.3-2.4 percent.

“Keidanren set an unusually high target of 3 percent for wage hikes and the government has expanded tax incentives for companies raising wages,” said Yuichiro Nagai, economist at Barclays Securities, which forecast a wage hike of 2.3 percent.