By: Samar Samir
CAIRO - 12 January 2020: Two days ahead of the Washington meeting for the foreign and water ministers of Egypt, Sudan and Ethiopia over the Grand Ethiopian Renaissance Dam (GERD), Ethiopia asked for South African mediation in the controversial dam file.

Ethiopian Prime Minister Abiy Ahmed announced that he asked South African President Cyril Ramaphosa to mediate to find solutions to the disagreement between the three countries after the latest round of negotiations ended in stalemate.

“As for Cyril Ramaphosa, he is a good friend for both Ethiopia and Egypt and is the upcoming president of the African Union. He can make a discussion between both parties to solve the issue peacefully because peace is the foundation of everything here in Africa,” said Ahmed in his speech on Saturday.

“That is why he can mediate as a brother between Ethiopia, Egypt and Sudan. I am sure that he will play a significant role in bringing us a win-win approach,” he added.

In his speech during the conference, Ramaphosa welcomed the role of mediation, saying “What is pleasing is that both countries are willing to discuss this matter and find solutions. I had a brief discussion with President Sisi and he touched to me that he is willing to have discussions with Ethiopia and the same has been pronounced by the Prime Minister, Abiy ahmed."

“I believe that finding a solution is possible because the two countries are great countries and the Nile River is important to both countries. There must be a way through which the interests can been addressed and there must be a way through which solutions can been found,” he added, continuing “As for ourselves, we are willing to play a role for facilitating whatever agreement that can be crafted and we remain supportive to finding peaceful solutions between countries in our continent.”


At the end of the last round of the tripartite meetings between the water ministers of Egypt, Sudan and Ethiopia in Addis Ababa on January 9, 2020, Egypt and Ethiopia announced that the two-day discussions reached a deadlock again.

Egypt said that it attempted to create a convergence of views via submitting a group of proposals and studies that guarantee for Ethiopia to generate electricity continuously and efficiently during periods of severe drought without causing harm to the Egyptian water share. Meanwhile, the Ethiopian Foreign Ministry said “Egypt’s proposal will make the dam be filled in 12 - 21 years’ time and obliges Ethiopia to compensate the cumulative deficit in water it uses to fill the dam.”

To resume the stalled talks, It has been agreed that the US Department of Treasury will host a meeting for the foreign and water minister of the three countries to find solutions on January 13. Both Egyptian Foreign Minister Sameh Shoukry and Minister of Water Resources and Irrigation Mohamed Abdel Atti headed to Washington to attend the meeting and hold a series of talks with the US officials and other concerned parties. The meeting also will be attended by representatives from the World Bank.

"Firstly, both countries did not reach a consensus on the years of filling the dam’s reservoir during drought and prolonged droughts," he told "Hadret al-Muwaten" [Or Mr. citizen] talk show on AlHadath Alyoum on Saturday. 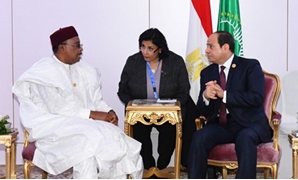