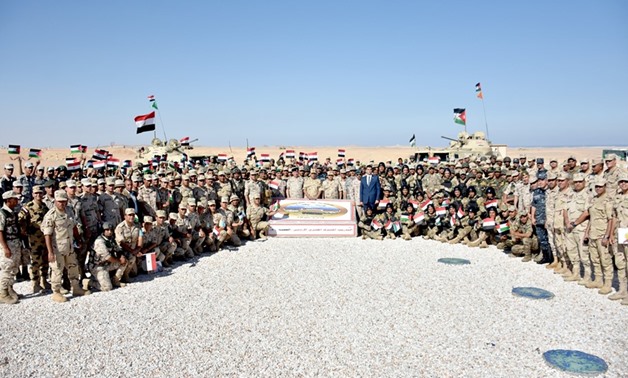 By: Egypt Today staff
CAIRO – 1 November 2019: In light of enhancing and upgrading the Egyptian military forces’ qualifications, ground, naval, air forces have participated in series of military exercises with military counterparts from Jordan, Russia and Pakistan.

Egyptian and Jordanian armed forces concluded the joint military exercises "Aqaba 5" in the Egyptian southern military zone, said the Egyptian Ministry of Defense in a statement on Friday.

Ground, naval and air forces, along with Special Forces, of the two armies participated in counter-terrorism training, which come in light of a plan of joint drills between two countries.

The final phase of the training included a joint operation to eradicate terrorists who could take hotbeds in border villages, the statement said, adding that some fighter jets have carried out reconnaissance and aerial operations to check possible terrorist threats or movements. Then elements of military engineers entered to secure the areas and detect explosive devices.

Coincidentally, naval forces of the both countries conducted a number of activities like storming an island of vital importance on the Red Sea coast after being cleared of armed terrorist elements, the statement continued.

Meanwhile, tripartite military drills titled "Dawn of the East 1" between armed forces of Egypt, Jordan and Pakistan kicked off on Friday and would last until November 8, 2019, the Egyptian Ministry announced in another statement.

General Officer Commanding Special Service Group Maj Gen Mumtaz Hussain delivered a speech and praised the participation of his forces in the training.

It is the first time for the Egyptian army to take part in the “Dawn of the East 1” drills, the ministry added in the statement.

Moreover, The Egyptian-Russian joint military exercises “Arrow of Friendship-1” kicked off in Egypt, said Egyptian Ministry of Defense in a statement on Friday.

The preparatory phase of the two-week training started with theoretical sessions on the training and advanced air defense systems, in light of exchanging experience between two countries on air defense drills.

Commander of Egypt's Air Defense Forces Ali Fahmi inspected an exhibition of Egyptian-Russian air defense equipment that will be used in the training, the statement said, adding that Fahmi gave a speech at a celebration held on this occasion.

He affirmed that the training is being conducted on Egyptian territories for the first time and this indicates the deepness of Egyptian and Russian friendship.