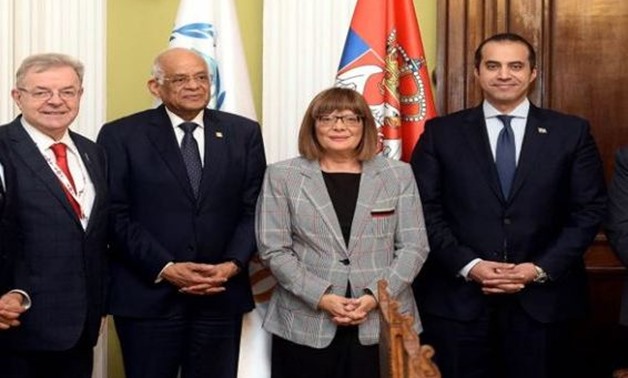 By: Egypt Today staff
CAIRO - 17 October 2019: President of the Serbian National Assembly Maja Gojković received Egypt's counterpart Ali Abdel Aal, where they discussed strengthening parliamentary cooperation as well as coordination within the framework of the international meetings, Egyptian media quoted the ambassador to Serbia as saying.

This came on the sidelines of the 141st Assembly of the Inter-Parliamentary Union (IPU) held in Serbia's Belgrade between October 11-17, Egyptian media reported on Thursday.

Abdel Aal in July, 2018, departed to Belgrade, upon an invitation from Gojković, to mark the 110th anniversary of the establishment of diplomatic relations between the two countries.

Gojković, in June, was also keen to visit Egypt to convey an invitation to President Abdel Fattah al-Sisi from his Serbian counterpart to visit Belgrade. Gojković renewed the invitation during Abdel Aal's visit, the ambassador said.

She also affirmed her country's support for Egypt's initiatives in multilateral relations, its legal rights with regard to natural resources, and expressed also appreciation for the Egyptian efforts to combat terrorism, which threatens the entire international community.