The annual water deficit in Egypt is 21 billion cubic meters. The gap is bridged through imports in the form of food, water recycling, and underground water. There is a need for further sustainable solutions to secure the water needs of agriculture, land reclamation, and citizens in border governorates. Since seawater is abundantly available, it can be reliable a source of potable water by virtue of desalination.

Professor of Physical Chemistry of Polymers at the American University in Cairo (AUC) Tarek Madkour explains that Salinity is the presence of salt in water and desalination is the process of removing salt from water for the purpose of using it in agriculture, drinking, and others.

To carry out the procedure, it is essential to use materials that differentiate between the water molecules and the salt ions as once the sodium chloride is dissolved in water, it dissociates into sodium and chlorine ions causing salinity.

There are many aspects determining the difference between salt and water molecules, Madkour explains. When sodium chloride is not dissolved in water, it is a solid material, while water in room temperature is a liquid material. Salt is made of ions which are charged particles either positive or negative. On the other hand water is a neutral polar compound. Salt molecules are round-shaped while water molecules are V-shaped and smaller than salt molecules. 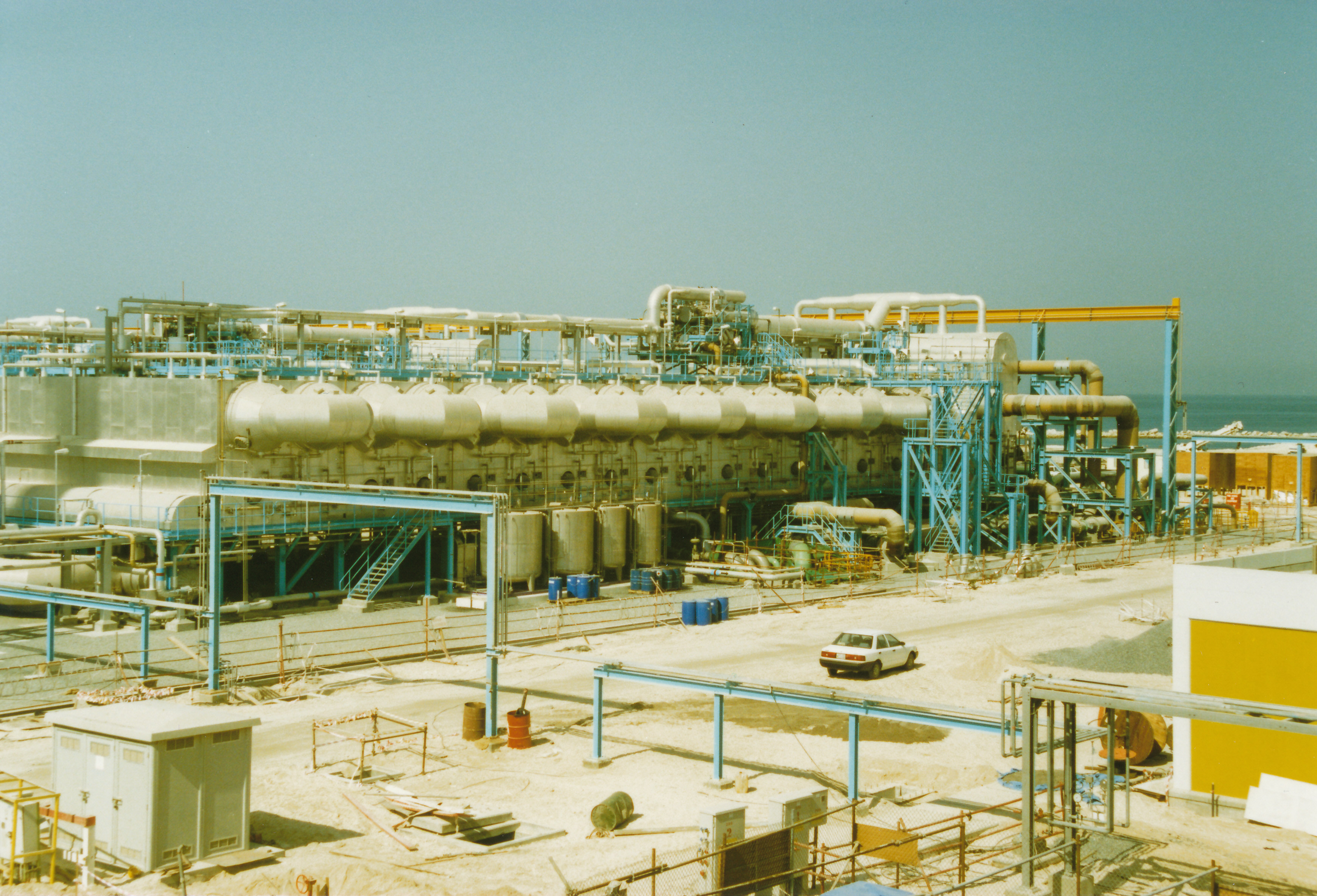 The frequent awards winner explains that determining the desalination technique is intertwined with the aspect setting the difference between salt and water.

The distillation technique depends on the difference in form. In room temperature, salt is a solid material that has a very high of boiling and melting points. In order to liquidate such particles by melting and not by dissolving, it has to be exposed to very high temperature surpassing 100 degrees. Thereby, salt remains solid at the bottom of the vessel after seawater boils at 100 degrees and evaporates.

The second technique is called reverse osmosis (RO) and it is the most common in present. The concept is similar to the process assumed by plants to acquire water. The roots possess semi-permeable membranes to suck water from the soil, the professor clarifies. Semi-permeable membranes are not exclusive to desalination as they are also used to purify water from bacteria, and any other contaminant particles. All water plants the government is currently building use that technique.

Membranes used for desalination are made of several materials. The most common one is the biological polymers. Those should be extracted from the plants' roots but as that would not be sufficient on a large scale, biological material is prepared in laboratories. Major examples are cellulose acetate, polysulfones (PSF), and polyamides, Madkour clarifies highlighting that there can be more than one membrane stacked above each other to acquire strength, toughness, and specific degrees of permeability.

The membranes capacity to assume their function properly is determined by the amount of water desalinated. For biological membranes like cellulose to last longer, it can be blended with stronger natural material so it would not weaken over time and rupture. Those materials can be polycarbonate lactone and glycolic acid. The professor himself is involved in research studying possible enhancements in capacity, durability, and bio-degradable properties.

The third and last technique is ion exchange. That has been around for 40 years. That method depends on chemical interactions between saline water and certain chemical compounds in the form of a non-permeable membrane whereas the fluid passes around it turning into potable water.

Distillation has major drawbacks, Madkour says. One is that the usage of many huge heaters consumes a large amount of electricity and energy. In the past, oil prices were not as high as now so currently other techniques would be more feasible. Another disadvantage is that salt residues corrode the inside of these heaters and increase the saline concentration of the water. Thus, they have to be regularly cleaned and replaced.

In case of RO, energy used to apply pressure in RO is a disadvantage. Another is fouling of the membranes which occurs as salt particles accumulate in the pores so it must be regularly regenerated (cleaned) to not clog the pathway of the water and replaced. Another option is using bio-degradable membranes as artificial materials like plastic would hurt the environment after disposal. Salt Mine – CC via flickr/AHLN


Membranes would be subject to life-cycle assessment (LCA) to determine when their capacity would decline. The professor is now involved in a research project that studies designing environment friendly bio-degradable membranes so that they would degrade fast in the soil providing it with necessary nutrients like potassium, magnesium, and calcium. Also, the salt inside can be collected and sold.

As for ion exchange, the drawback is high accumulation of salt on the surface of the membrane so it has to be thrown away. That was not viable economically and environmentally.

"Now, there is nanotechnology. So every time the membrane is used, it is possible to peel a nanometer," Madkour clarifies as that is another research project he works on. The peeling is done before the water runs using electro spinning technique so that water infiltrates through all layers instead of around them exchanging ions with all of them.

Whether in RO or ion exchange, the membranes capacity and number of layers should be designed to fit the degree of salinity of water.

Seawater is channeled to the plant through pumps that have to be made of materials that would not be corroded by salt. There are two types of processes. One is discrete process that is pumping seawater to be preserved in a tank and desalinated gradually. That is an old method that was wasting time.

Distillation can produce tap water if the technique is perfect. However, in the past desalinated water could have been mixed with brackish water so it would include a little higher content of salinity than it should. Another drawback applying for both distillation and RO is that desalinated water may lack minerals that exist in natural fresh water and that the body needs as well as have an unusual taste. Madkour explains that rivers and streams corrode banks as they run dissolving minerals. The concentration of such salts is not high as a huge amount of water comes in from clouds while salt has been accumulating in seawater as it evaporates but salt continues to be concentrated throughout thousands of years.

Using the pH measure, which determines the degree of acidity or alkalinity in water, pure H2O is at pH7. For the Nile or any other river, its water would be at pH6.5 because of the minerals it contains. "People got used to the taste of that water for thousands of years. If they drink pure water, they would not like its taste," the professor highlights.

Madkour clarifies that bottled water companies add missing minerals including potassium, sodium, and magnesium in the plant following desalination. Desalinated water is safe in the meaning it would not cause "direct harm." Yet, people have to ensure they are making up for missing minerals in their diet or resort to bottled water.

The professor explains that the government plans to form satellite communities in remote areas that would depend on agriculture. Hence, water needs have to be fulfilled without connecting to national grids. That is because they are in full capacity and the costs of extending pipes over such large distances would be very high. He added that the desalination plants being built to produce drinkable water would definitely add necessary minerals before pumping to networks.

President Abdel Fatah al-Sisi inaugurated in January a desalination plant in Hurghada that is considered to be the largest in the Middle East stretching on 56,000 square meters with a daily capacity of 80,000 cubic meters. The project called “Al Yosr” was executed in a cost of LE845 million.

However, the plant’s daily production is currently just 40,000 cubic meters. It will work in full capacity when all renovation works in the water and sewage networks is finished supplying water for the entire city.

Seawater is pumped through two pipes - the width of each is 1.25 meter - supplying 1,400 cubic meters per hour without the need of any engines. The procedure is undertaken over three stages. The first consists of removing any solid bodies or pollutants by adding certain chemicals and channeling the water through filters.

The second is called Multimedia Filtration so that water passes through filters having an area of 350 square meters each and containing layers of sand, pebbles, and activated carbon. That procedures removes 90 percent of impurities.

Finally, the water goes through fine filters before the RO starts. Al Yosr is designed to receive water whose salinity is up to 45,000 milligrams per cubic meter removing 99 percent of it. The largest desalination plant worldwide is under construction in Al Ain Al Sokhna with a daily capacity of 164,000 cubic meters to fulfill the needs of the economic zone northeastern the Suez Golf.

The capacity of the second one is 250,000 cubic meters per day but will start with only 150,000 cubic meters. Twenty percent of its construction, funded by a KWD 35 million loan from Kuwait Fund for Arab Economic Development, is finished.

A desalination plant is under construction in Upper Egypt in Shalatin at a cost of LE200 million. The plant capacity is 20,000 cubic meters per day but will start by producing just 3,000 cubic meters daily.