By: Egypt Today
As the Coptic community celebrates Easter today, we look back at one of the oldest traditions in Egypt’s Coptic history: Great Friday


Standing in the middle of the ancient Saint Shenouda church in Old Cairo, I can easily imagine myself among the congregation of Roman-occupied Egypt. The church of dates back to the fourth century AD and is a living manifestation of Coptic history. The wall surrounding the building was raised to the level of Amr Ibn El-A’as Street since the church itself is now below street level. To actually enter it I have to go through the wall via an iron gate and descend two flights of stairs, until I’m at the church’s level: the street level of ancient Egypt.

The church is a large, rough square stone building and is a wonderful example of cultural appropriation, displaying a unique mixture of Roman, Coptic, and Islamic influences. Its high ceiling is supported on gray and white marble columns, and pointed arches rest on top of the Roman columns, leading the eye to the ancient Coptic icons in glass cabinets hanging on the adjacent wall.

The ceiling, perhaps 10 meters at the highest point, is elevated in the middle, rising to form a triangle above the aisle leading to the central altar. Three stunning, intricately decorated meshkawat (lanterns) of different sizes dangle from the peculiar triangular ceiling.


Today, Egypt’s Coptic community celebrates Easter and the tradition of Great Friday is one of the oldest in Coptic history. In Orthodox churches, it’s a nine-hour ceremony that commemorates the last day of Christ’s life—his trial, crucifixion, death, and burial. Some of the Coptic hymns sung on that day, such as “Pekthronoc” and “Golgotha,” can be traced back to ancient Egyptian hymns sung as part of the funerary rites to send off the deceased’s soul to the next world. When the Egyptians converted to Christianity, they changed the lyrics of these hymns to accommodate their new faith but maintained the music and started singing them to Christ on the day of his death.

The experience of Coptic music is radically different from one church to the next. I find that the ancient churches adhere more to the original conduction method of Great Friday as passed down through church traditions. This means that prayers and hymns aren’t abbreviated and are—to a larger degree than in more modernly constructed churches—recited in Coptic. One ancient church that holds fast to the old traditions is that of Saint Shenouda where the ceremony of Great Friday takes the listener straight to Golgotha.

On our way to St. Shenouda’s, my mother and I pass by the florist and take a bouquet of roses to be placed next to Deket El-Salaboot (a wooden table, outlined with roses, designed to support an icon of the crucifixion). As we enter church through the high wooden door on the right, we’re greeted with the spicy, warm scent of incense. The deacons and priests are dressed in mourning attire: the priests are in black and the deacons—still in their usual white Tunias—have their red sashes on backwards to reveal blue crosses.

The church itself is dressed for mourning. The altar’s red shroud has been replaced with a black one bearing no sign but that of a Coptic cross. Black flags carrying the image of a thorn-crowned Christ are attached to the church’s columns. Even the lights illuminating the meshkawat are off to represent the darkness that fell over earth when Christ surrendered his soul to the Father, and no light can be seen in church except that of the faint sun’s rays coming in through the clerestory.

Deket El-Salaboot is placed in the center, between the altar and the congregations’ pews, housing an icon of the crucifixion, and adorned with red roses. My mother’s bouquet as well as those brought by others are taken by a deacon to be placed before the slab. Three shorias (silver and gold-plated incense pots) hang before Christ’s image. The priests burn incense before Christ on the cross as the prayers and hymns start, and they continue to add incense to the shorias throughout the ceremony so that the air, my clothes, headscarf, and even my hair beneath are never without that sweet scent.

Numbers quickly increase around me until I’m breathing other people’s breaths and I can only get some refreshing coolness in this stifling heat by touching the marble column to my right. All seven of the daily prayers are recited and soon I find myself swimming in a sea of Coptic with only limited knowledge to help me navigate my way through my own mother tongue. The Bible chapters as well as the psalms sung before these are all read in Coptic at a slow, serene pace, and then repeated in Arabic at a quicker one. But what distinguishes that day from any other in the week of Christ’s passion is the famous, most-beloved, and rather long hymn: “Amanet El-Les El-Yameen” (The Right-hand Thief’s Honesty).

Though people may lose their energy somewhere in the middle of the ceremony, the moment the prayer of the sixth hour starts (the hour of Christ’s death) everyone is on their feet and when it concludes with that hymn, hundreds of voices chant in unison with the thief crucified on Christ’s right “remember me Lord when you come into your
Kingdom” in a sound so loud, so heartfelt, so truly honest that the foundations of the church shake beneath my feet. No music accompanies that hymn, and none is needed to help us hit every note. At that moment nothing matters, not the stifling heat, not the college assignments waiting for me at home, and not even the “real” world outside.

Nothing is as real, as profound, as this moment when my hands are digging into the pew before me, burning an invisible print into the wood. I am one with every soul in church, one of a people, and God is listening. I look at the people around me, some are silently weeping, some have their eyes closed, my mother among them, and some their hands held up in supplication. At that moment, I can’t help but recall my ancestors, the Egyptians who stood in my place centuries ago and sang this hymn to God on this very day. What did they sacrifice to stand here? Did they have to hide from Roman soldiers? Did they risk their lives to sing this hymn I’m singing now? I think of where they are, if their hearts are with us at their old church, as their souls stand before God’s throne still singing, commemorating Christ’s sacrifice that has granted them their eternal life.

Great Friday ends with Christ’s burial. The church sets up a projector screen to let us see what’s happening inside the altar. I watch as the image of Christ is taken off Deket El-Salaboot and into the altar, washed and covered in rose petals before beingwrapped in a white sheet and buried. After the ceremony ends at around 5pm, the priests return to the altar to recite all 150 psalms at Christ’s grave and my mother and ascend the stairs of St. Shenouda’s to reach the street and it feels like I’m stepping outside one era and into another. The first thing we do is cross the street and buy a bottle of vinegar from a nearby kiosk to break our fasting with vinegar in homage to Christ’s being given it on the cross. To me, this officially marks the end of Great Friday. 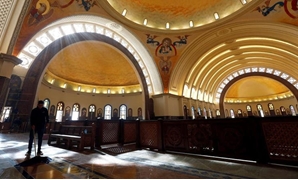