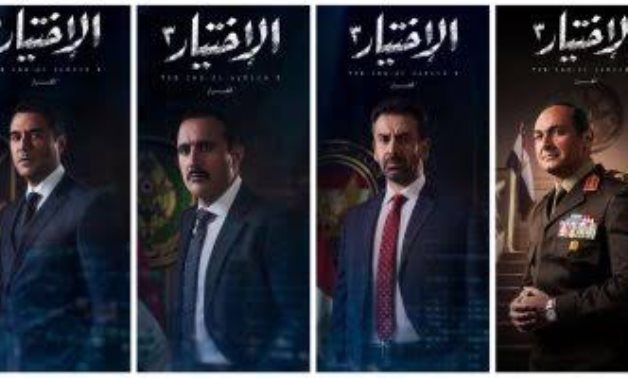 The third installment of the hugely popular patriotic series El Ekhteyar (The Choice) documents the events Egypt witnessed during the years that followed the January 25 Revolution and how the Muslim Brotherhood manipulated their way into power. The sequel carries the theme of “The Decision,” and highlights how Mohamed Morsi (played by Sabry Fawaz) served as the president of Egypt, from June 30, 2012 to July 3, 2013.

But with millions taking to the streets to protest Morsi’s rule, former Minister of Defense and current President of Egypt Abdel Fattah El Sisi (played by Yasser Galal) took the decision to support the Egyptian people during June 30 Revolution, saving Egypt from the dark path of the Muslim Brotherhood regime.

After the June 30 Revolution, Morsi was given a 48-hour ultimatum by the military to meet their demands and to resolve political differences, which Morsi disregarded, along with the demands of Egyptians. El Ekhteyar reveals facts and presents leaked videos released for the first time tackling the protests that erupted across Egypt on June 30, 2013 in which protesters called for Mohamed Morsi’s resignation. Over the course of its episodes, the drama documents the behind the scenes of the most critical 96 hours in contemporary Egyptian history.

El-Ekhteyar part 3 is docudrama sequel that features throughout its episodes dramatized re-enactments of historical events that we have all witnessed and were part of. These re-enactments were perfectly employed in the series, building up patriotic sentiment and adding a nostalgic sense of pride. The credit goes to the maestro of the El Ekhteyar sequel, director Peter Mimi.

Yasser Galal provided an amazing performance, dazzling viewers as he mastered all the details of the character, from his walk, facial expressions, gestures and of course his voice which is impossible to tell from the President’s. His role also presents the personal side of the then-Minister of Defense as a caring husband who helps his wife with the housework and a dedicated father who listens to his daughter and gently advises her.

Sabry Fawaz succeeded in reflecting Morsi’s ineffectual character in the majority of the scenes, but Fawaz and Mimi should have worked more on the body language, not to mention the physical appearance, with the make up artist and the stylist.

The veterans, on the other hand, proved a cut above. Abdel Aziz Makhyoun knows well how to employ all his tools as an actor and that was clear in his convincing performance of Badie’s character. Meanwhile Khaled El Sawy exerted huge effort performing the character of one of the most influential and controversial members of the Muslim Brotherhood, Khairat El Shater. Shater was famous for his sullen look which Sawy managed to convey throughout the series; without directly imitating Shater, Sawy brilliantly captures the spirit of the character he is performing. And in his few scenes, Ahmed Bedeir managed to reflect the calm and wise character of Tantawy.

Framing the heroic actions of the nation’s police, intelligence and army, the series also captures the human side of how these critical events affected Egyptians. As such the second plot line features the triangle of General Intelligence colonel Marwan El Adawy (Ahmed Ezz), Military Intelligence colonel Mostafa Khalifa (Ahmed El Sakka) and National Security Agency colonel Zakaria Younis (Karim Abdel Aziz). There is no doubt that the cooperation between three megastars added great value to the series; there was a good harmony between the three giants that helped them to accurately reflect the coordination between General Intelligence, Military Intelligence and the National Security Agency.

Zakaria Younis was the leading character of El Ekhteyar part 2 and Abdel Aziz continues in this part with the same disciplined performance. Ahmed Ezz’s natural sense of humor adds a human touch to his role and doesn’t affect the seriousness of the Intelligence Officer’s character. Ahmed El Sakka’s overall performance was a bit traditional and he has to work more on his facial expressions because he appears a bit unemotional in some of the scenes.

As in previous installments, Part 3 continues to refute the claims of Muslim Brotherhood and uncover their illegal actions, presenting to the public a number of truths including how Muslim Brotherhood leaders used to confiscate Identity cards from people at Rabaa sit-in to force them to stay; and how Muslim Brotherhood leader Khairat El Shater (portrayed by Khaled Elsawy) tried—and failed—to have several national security officers dismissed. The series unveiled for the first time how Shater planned to destroy the reputation of former general commander of the Armed Forces and Minister of Defense Mohamed Hussein Tantawy (played by Ahmed Bedeir), get him dismissed and appoint someone else who is loyal to the Muslim Brotherhood and not to Egypt.

The episodes go on to disclose how the Muslim Brotherhood conspired to take over the Egyptian Armed Forces, planning the 2012 Sinai attack which killed 16 soldiers. The involvement of one Muslim Brotherhood leader in a massive operation to smuggle weapons into Sinai is also revealed. Colonel Marwan Kadry (portrayed by Ahmed Ezz) from the Egyptian Intelligence cooperated with Colonel Mostafa Khalifa (played by Ahmed El Sakka) from the military intelligence to thwart this massive operation to smuggle weapons into Sinai. The operation showed the complete coordination between General Intelligence and Military Intelligence to protect Egypt from the destructive plans of its enemies.

The series chronicles the destructive plans of the Muslim Brotherhood to smuggle weapons, incite civil war and divide the Egyptian people. The episodes also chronicle their plans to fly in jihadist elements from abroad to form militias on Egyptian soil. In one such episode, viewers are shown for the first time how Morsi signed Presidential pardon lists that contained names of Jihadist elements and people involved in terrorist operations.

In another episode ousted President Mohamed Morsi asked Field Marshal Tantawy to give the presidency $2 billion from the Army budget but was refused. In a leaked video, El Shater can be seen announcing, “I am capable of mobilizing one million people to burn down National Security Agency headquarters. . . .Why? because I can easily confront National Security Agency officers, there is no problem in that.” Such a declaration proved beyond any doubt the desire of the Muslim Brotherhood to destroy the National Security Agency.

Coming to light for the first time is the fact that the Brotherhood appointed Abdel Fattah El Sisi in 2012 as minister of defense only because they thought he would be loyal to their organization; they are quickly proved mistaken. Part 3 explores the relationship between former Minister of Defense Sisi, Morsi and the Muslim Brotherhood. We are shown the details of the meeting between Shater and Sisi where Shater offered joint economic cooperation between the Egyptian Army and Muslim Brotherhood but Sisi completely ignored his demand.

In another instance, when Sisi invited Morsi to attend the military show of the second army, he deliberately announced his invitation was so “you could see part of the strength of the Egyptian Army.” El Ekhteyar revealed Sisi’s desire to develop the Egyptian Army by boosting their morale and dealing with them with love and respect. “If I humiliate someone he will never be a fighter,” Sisi says in the same episode. “He has to feel proud that he is a soldier in the Egyptian Army.”

In another recorded meeting, Sisi tells Morsi: “The Egyptian Army is untouchable and has managed to preserve its neutral stance during the past period, so please keep it away from your political conflicts.” He goes on to state that the Egyptian Army is great, patriotic and strong and that it’s strength is derived from its honor, but a single word can hurt the army. “Any respectable country must not accept the humiliation of its army and I will not accept this,” Sisi tells Morsi.

The series also shows how Sisi was keen to strengthen the relationship between Egyptian army and Sinai people.

Another leaked video shows a meeting between Tantawy, Sisi and Morsi where the latter threatened violence across Egypt in the event he lost the presidential race. Morsi can be seen asking Tantawy to cancel the High Constitutional Court’s sentence that dissolved the People’s Assembly but Tantawy refused, saying he couldn’t cancel a sentence issued by the court. The Field Marshall firmly refused all of Morsi’s demands, adding that he couldn’t interfere at all in the results of the presidential elections.

The violence that ensued following Morsi’s election is well documented. The series uncovers the involvement of the MB in the murder of journalist El-Husseini Abu-Deif, who died after being injured in the clashes between Morsi supporters and police in December 2012.

In search of truth

Not only does El Ekhteyar attempt to expose MB lies, it also serves to bring to light other revelations that were not known to the public at the time. For example viewers are only now learning how Military Intelligence discovered that the social media accounts insulting the Egyptian Army and spreading rumors about the dismissal of former Minister of Defense Sisi were created by a company owned by Muslim Brotherhood leader Khairat El Shater. The series also revealed further secrets about the creation of the 95th Division, one of the most dangerous armed branches of the Muslim Brotherhood which was founded by Shater and supervised by former minister of youth Osama Yassin.

The birth of the Tamarod grassroots movement is also portrayed. The series follows its spread among Egyptians to collect millions of signatures, reaching more than 20 million signatures demanding the ouster of the Muslim Brotherhood’s violent regime that abused millions of Egyptians to create religious fascism (Christians in Egypt facing unprecedented levels of persecution during ousted President Mohamed Morsi regime was another theme touched on by the series.

Egyptian star Essam Elsakka embodied the role of political activist Mohamed Abdel Aziz, the founder of the Tamarod movement and who is now a member of the Egyptian Parliament for the Coordination Committee of Parties’ Youth and Politicians (CPYP).

Following the violence and ahead of the June 30 popular uprising, Sisi can be seen warning Morsi and Shater: “We are responsible in front of God for the words we say,” Sisi says. “If Egypt is deteriorating and we don’t take any stance to prevent this deterioration because we care about our political positions, then God will definitely punish us.”