Aswan Forum sheds light on pathway out of pandemic to development 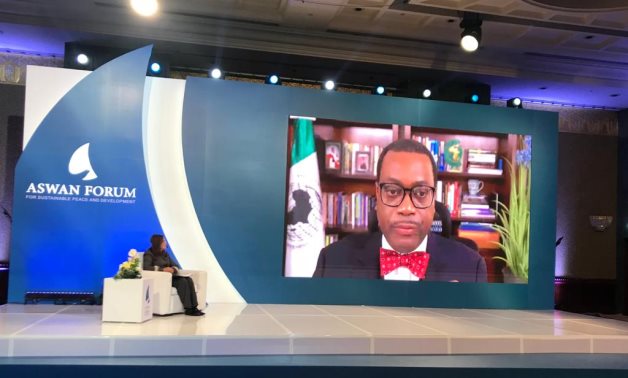 CAIRO – 1 March 2021: A session titled "Recovering Stronger, Rebuilding Better: Pathways for a More Secure, Resilient, and Prosperous Africa" was held on the first day of the second edition of Aswan Forum for Sustainable Peace and Development.

Director of Africa Centers for Disease Control and Prevention (Africa CDC) John Nkengasong noted that "it will be a mistake to count on others to produce ways of prevention and wait for them to share their findings and production with us… We need to make effort to meet our vaccination needs."

Given that a number of African countries are experiencing armed conflicts, the AfDB president asserted that "insecurity is an economic issue."

Since COVID-19 has made creating jobs and achieving self-sufficiency priorities, Adesina pointed out that "we need to create an industrial manufacturing zone."

Minister of Foreign Affairs of the Democratic Republic of Congo – current chair of the African Union (AU) - Marie Tumba Nzeza explained that "to boost manufacturing we need meaningful investment in infrastructure and we need to invest in conflict prevention."

Egypt is one of a few developing countries and the only in MENA region that achieved positive GDP growth in FY2019/2020. Egypt’s Minister of Planning and Economic Development Hala El Said clarified that is attributed to the fact that Egypt has embarked on economic reforms since November 2016, restructured energy sector, and created a better investment environment.

The minister added that LE1.5 trillion was injected to improve the competitiveness of Egypt’s attractiveness to investors. "If it wouldn’t for COVID-19, we could achieve growth of 6% as we recorded 5.6% in FY2019/2020," El Said highlighted.

"Digital economy and agriculture were the most resilient sectors during the pandemic," Minister El Said elaborated showcasing that LE100 billion have been allocated as a relief package.

Similarly, Under-Secretary-General of the United Nations and Special Advisor on Africa Cristina Duarte asserted that the pandemic made it clear that investing in education, human capital, and the ICT sector is integral in development endeavors.

Speaking of eliminating the impediments facing the continent, Duarte said, "conflict can be prevented by cutting illegal financing." On the other hand, Duarte showcased that "sustainable financing requires an international shift in financing practices." The international official also asserted the necessity of indulgence control and combating tax evasion.

Duarte noted that Africa has strategic assets that can be leveraged through the implementation of African Continental Free Trade Agreement (AfCFTA), which will boost manufacturing either. It is noteworthy to mention that the AfCFTA has gone into force in January.

Africa "may miss $88 billion in financing, if we don’t take appropriate steps," the under-secretary-general of the United Nations said urging concerting efforts to carry out development programs across the continent.

Japan’s State Minister of Foreign Affairs Washio Eiichiro pointed out that the pandemic showed the vulnerability of state institutors in a number of African states.

"It’s an opportunity to address the root causes of conflict...Japan can help with capacity-building in the areas of police, customs, and intergovernmental synchronization," the Japanese minister stated.