'Egypt's population growth has to be cut to 400K yearly so we can feel impact of public spending': Pres. Sisi 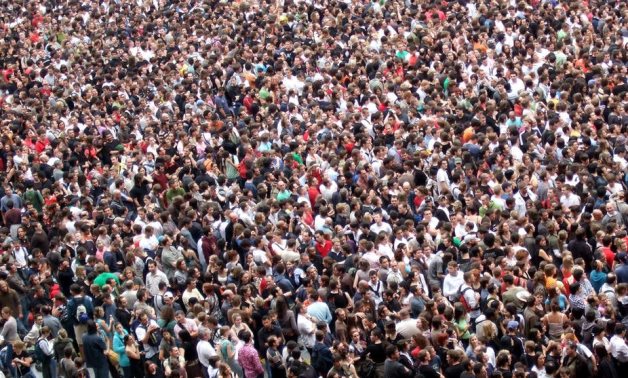 CAIRO – 16 February 2021: While inaugurating a number of medical establishments and getting briefed on the achievements of the Ministry of Health and Population, President Abdel Fatah al-Sisi said Tuesday, “We won’t feel the impact of public spending [on national projects and infrastructure] unless annual population growth is cut to 400,000 [from 2.4 million].”

For the 100 million Egyptians to feel the impact of development programs accomplished, our annual GDP must be $100 trillion which is beyond our capacity, President Sisi added.

“Didn’t you do a revolution in 2011 for a better life? It won’t happen with a population crisis...Overpopulation is a national security matter,” the president reiterated.

“Why would you get a child you aren’t able to feed and don’t know how they would be employed? The outcome is 50% living in slums and building residences on agricultural land depleting our source of food,” the president questioned.

“You overwhelm yourself and the state. Then, you revolt and the series of destruction goes on,” the president complained.

Concerning education, Minister of Planning and Economic Cooperation Hala al-Said pointed out that the “number of students in Egypt will become 44 million in 2052 up from 22 million now, if the same rate of population growth continues. That would require the increase of the current capacity of classrooms and teachers by four times.” The minister added that the ideal Egypt must reach is 1.9 child per woman.

Since family planning is key to manage the crisis, Minister of Social Solidarity Nevine al-Qabaj stated that five million visits were made to 750,000 rural women to raise their awareness on family planning within “Two Are Enough” campaign.

Speaking of what has been accomplished on the front of introducing the Universal Health Insurance System, Minister Zayed said that 670,000 have been enrolled as it has gone into force only in Port Said until present, and has been just launched in Ismailiyah Tuesday by the president.

It will be activated in other governorates this year either. For instance, 63% of Luxor’s population got enrolled, Zayed stating underlining that the cost of introducing it in the Upper Egyptian governorate is LE9.6 billion.

Further, 83% of families in South Sinai have been enrolled while Aswan will join soon as well as Suez. The cost of introducing the system in the latter is LE3 billion.

With regard to initiatives targeting to screen citizens for precise diseases and providing them with treatment if needed, the minister said, "Waiting lists of patients in need of immediate surgeries have become obsolete in Egypt. Such lists included a total of 700,000 patients, who had to wait for between three months and a year."

As for a disease that was very widespread in Egypt, "“Egypt is on its way to be declared free of hepatitis C. On the other hand, some developed countries will achieve that by 2050,” Zayed pointed out.

Commenting on the matter, President Sisi said, “Imagine what would happen to the two million citizens who were diagnosed with hepatitis C in time of pandemic if they had not been cured.”

"Within screening citizens for hepatitis C initiative, they were also screened for all kinds of renal diseases, and 80% of dialysis devices across the country were renovated in partnership with Long Live Egypt Fund," Minister Zayed underlined.

With regard to the Woman Health Initiative, Minister Zayed stated that its costs reached until present LE610 million screening 12 million women for breast cancer, chronic and gynecological diseases. The recovery rate of women diagnosed of breast cancer and who received treatment at public hospitals is 90 percent.

For children health, the president urged enabling children to get appropriate nutrition in light of the initiative launched in 2019 to detect obesity, anemia and dwarfism among school children.

The chief of state also showcased the importance of the initiative set to detect hearing loss early among little kids.

"Early diagnosis of hearing problems must be conducted before the age of 5 in order to offer a hearing aid device as well as speaking sessions for a couple of years," Minister Zayed clarified.

In a different context, the president greeted healthcare workers, and the souls of those who passed away because of COVID-19 infection.

Further, the president inaugurated Red Sea's first ever addiction treatment center dubbed Al Azima (Arabic for willpower). It is noted that Matrouh will also get its first facility of the sort soon, as stated by social solidarity minister. She added that the number of public facilities offering free of charge addiction treatment services rose from 14 in 2015 to 26 now, Social Solidarity Minister Nevine Qabaj.

Chairman of the Armed Forces Engineering Authority Ihab al-Far said that 170 healthcare projects were implemented for Health and Population Ministry, 80 for Armed Forces, and dozens of university medical care establishments.

In addition, 235 medical caravans were sent to border governorates by Egyptian Armed Forces.

The Egyptian Armed Forces had set up a medical center in Lebanon in 2006 amid the Israel-Hezbollah War. In 2020, 30,000 patients sought the center. Of those, 300 underwent surgeries, Far stated.