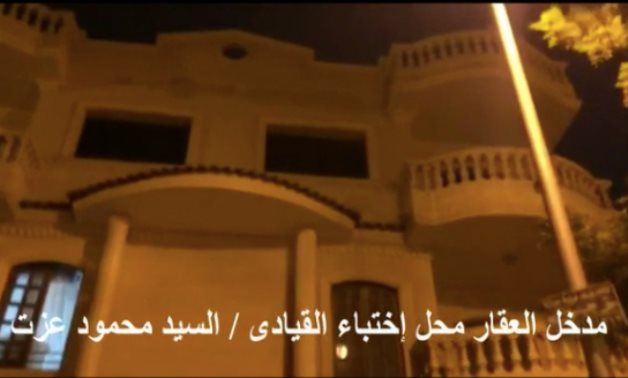 CAIRO – 28 August 2020: Video of a house where acting guide of the outlawed Muslim Brotherhood group Mahmoud Ezzat was hiding before being arrested was published by the Egyptian Ministry of Interior on Friday.

Ezzat (76 years old) was hiding inside an apartment in the Fifth District in Cairo despite the rumors that claimed he was outside Egypt, the Interior Ministry announced on Friday in a statement, noting that the security forces raided its apartment, upon a warrant of arrest from the prosecution.

The police confiscated a laptop and a number of mobile phones that have coded applications to enable him communicate with the MB members, besides a number of documents talking about sabotaging plans against the country, the statement said.

The terrorist leader was responsible for establishing the armed wing of the terrorist Brotherhood and was also the supervisor of sabotage operations committed by the organization members after the June 30, 2013 revolution, the statement said.

He has been accused of assassinating former Attorney-General Hisham Barakat, and injuring 9 other civilians in the same incident in 2015. He also accused of killing Brigadier General Wael Tahoun outside his house in Ain Shams district in 2015, killing Major General Adel Rajai outside his home in Obour City, 2016. Ezzat was accused of attempting to assassinate former Assistant Attorney General Judge Zakaria Abdel Aziz. in 2016, according the statement.

The detained terrorist also faces charges of involvement in car bombing accident outside the Oncology Institute in August 2019, which claimed the lives of 20 civilians and injured 47 others, the statement continued.

The Ministry of Interior listed the court verdicts that had been issued in absentia against Ezzat. He received two verdicts of death in the cases of spying for Hamas and Wadi al-Natroun Prison Break. He also got two sentences of life imprisonment (50 years in imprisonment in total) for charges of inciting violence and killing in trails dubbed in media as “the incidents of the guidance office” and “Minya violent incidents.”