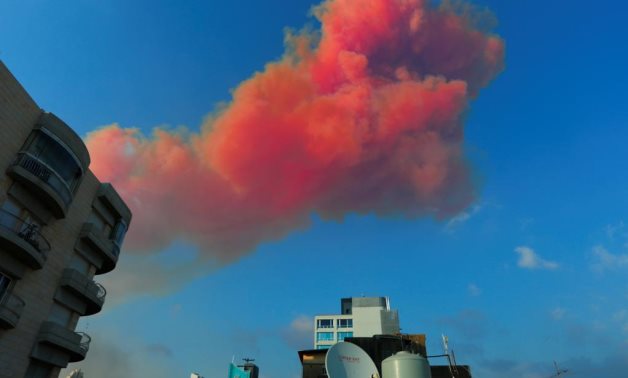 Smoke is seen after an explosion in Beirut, Lebanon August 4, 2020, in this picture obtained from social media. Gaby Maamary/via REUTERS

CAIRO – 5 August 2020: The Egyptian embassy in Beirut reported the death of three Egyptians in Tuesday's port's explosion, and that measures are being taken to transport the bodies to their homeland.

Egypt’s President Abdel Fattah El Sisi ordered sending two planes carrying medical aid to Lebanon immediately, after a deadly blast in the Lebanese capital, which reportedly killed at least 135 people and injured at least 4,000 others, while 80 are missing.

Al-Azhar, Egypt’s top religious authority, said its Grand Imam is following up on updates after the deadly explosion and is calling on all states to assist the Arab country.

“In the face of this humanitarian disaster, Al Azhar voiced its full solidarity with Lebanon and is calling on all Arab, Islamic and world countries to show solidarity and urgently give a helping hand to Lebanon, to overcome this ordeal and its harsh repercussions,” Al Azhar said in a statement published on its Facebook page.

The top Islamic institution also expressed its sincere condolences to the families of the victims, and wished the wounded people speedy recovery.

Egypt’s Foreign Ministry has also voiced deep concerns over the explosion in Beirut.

The ministry affirmed that “Egypt is following up on this update with total concern and is making the necessary contacts to know about the details of the matter and discuss how to assist sisterly Lebanon in this critical circumstance”.

Egyptian Ambassador to Beirut Yasser Elwy communicated on Wednesday with a number of Lebanese officials to follow up on the aftermath of the deadly explosion.

Elwy also extended the condolences of the Egyptian people over the victims of the accident, stressing the full Egyptian solidarity with the brotherly Lebanese people in this hard situation.

During the contacts, the ambassador reviewed the activities of the Egyptian field hospital in Beirut, which already started yesterday to receive a large number of injured people.

Governor of Beirut, Marwan Abboud, told the AFP that the damage from the port blast has extended over half of the city, with the cost of damage likely above $3 billion.

He has also upped his previous estimate of the number of “homeless” to 300,000, which is close to the total population of the central part of the capital.