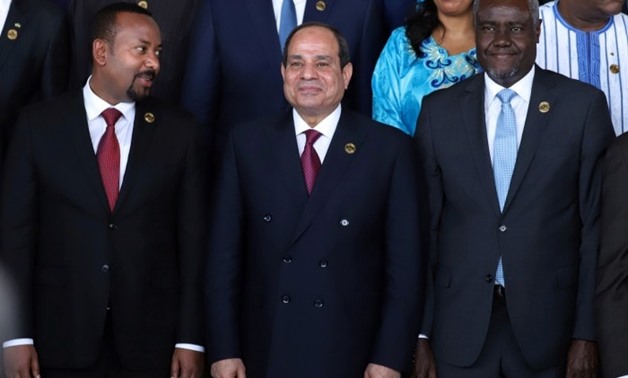 From left, Ethiopia’s Prime Minister Abiy Ahmed, Egyptian President Abdel Fattah El Sisi and African Union Commission Chairperson Moussa Faki Mahamat at the opening of the 33rd Ordinary Session of the Assembly of the Heads of State and the Government of t

CAIRO – 24 June 2020: After a decade of discussing technical and legal issues of the Grand Ethiopian Renaissance Dam, Egypt seemingly found it is time to take further steps, in a bid to bring Ethiopia back on negotiations track or at least stop it from filling the dam next month.

Statements of Ethiopia’s Foreign Minister Gedu Andargachew to Associated Press were crystal clear to describe the Ethiopian stance on negotiations. “For us it is not mandatory to reach an agreement before starting filling the dam, hence we will commence the filling process in the coming rainy season.” In short, the minister says an agreement, even if it was reached, cannot change anything.

Moreover, Andargachew accused Egyptians of “exaggerating their propaganda on the dam issue and playing a political gamble,” and said that some of them even “seem as if they are longing for a war to break out.”

Egypt then decided to refer the issue to the United Nations Security Council, in a bid to prevent Ethiopia from taking unilateral measures on filling and operating the dam.

Egypt has affirmed it is not against the GERD as a developmental project for Ethiopia, but that it wants an agreement that would guarantee Egypt’s water security rights and help the international community supervise the project and make sure it does not harm the interests of any of Egypt and Sudan. However, Egypt says Ethiopia’s “intransigence” has been an obstacle.

Despite legal steps taken by Egypt, Egyptian Foreign Minister Sameh Shoukry said that Egypt still aims to resume talks with Ethiopia and Sudan, in an effort to reach a “fair” agreement that would serve the interests of the three countries. In the letter sent to the UNSC, Egypt has called on the council to urge Ethiopia to return to talks, in order to reach a “fair and balanced” solution on the crisis. Egypt also said filling the dam without an agreement can put Egypt in a “clear” danger.

“We are not seeking any coercive action by the Security Council,” Shoukry told Associated Press (AP).

Read the full content of Shoukry’s interview with AP:

On June 17, Egypt’s Water Resources Minister Mohamed Abdel Aaty said talks to resolve differences on filling and operating GERD were concluded, after failing to persuade Ethiopia to refer the issue to the prime ministers of the three countries as a last chance to reach an agreement.

Monitoring the situation, Mohamed Al-Doweiry, deputy general manager of the state-run Egyptian Center for Strategic Studies, has viewed the reactions of each of Egypt and Ethiopia toward the dam issue since it emerged.

Egypt
- Egypt has not for a moment objected the Ethiopian policy on supporting its economy and building the dam to generate electricity, while not harming Egypt’s water interests.

- Egyptian President Abdel Fattah El Sisi on March 25, 2015 spoke at the Ethiopian Parliament, two days after the three countries have signed the 'Declaration of Principles', which aimed at putting an end to the dispute on Nile water sharing. The president affirmed that it is a good chance for history to write that nobody has wasted the opportunity to guarantee the rights of both Egyptian and Ethiopian peoples and build the pillars of future to children and grandchildren.

- Egypt has never rejected the option of negotiations in an effort to reach a peaceful solution to the crisis, despite the obstacles the country has faced, which were hard enough to put an end to negotiations at any time.

- Egypt did not choose to resort to international mediation without strong reasons. It went for mediators starting September 2019, after eight years of fruitless negotiations.

- Egypt has been all the time speaking about political solutions to the GERD issue, given that the political path is the most suitable to solve the issue. As President Sisi chaired the African Union in 2019, he has been keen on ending conflicts in Africa peacefully and attracting foreign investments to achieve development in the continent.

- Egypt also has accepted many Ethiopian demands during GERD talks as part of Egypt’s keenness to make a success of negotiations, including ending the work of the commission of international experts, which had been formed in 2012 and tasking only local experts from the three countries, after the international committee issued a report on the insecurity of the dam. The accepted demands also included not allowing the World Bank to take part in the negotiations for a long period.

Ethiopia
- On the other hand, the Ethiopian policy has so far rejected to stick to any technical or legal commitments that were stated by the declaration, although this declaration stipulates that the three countries commit themselves to the principles stated by it.

- Ethiopia has ignored many of the important principles stated by the declaration, including cooperation, coordination and good intentions (the first principle), not harming the interests of those concerned (the third principle) and fair and appropriate use (the fourth principle).

- Ethiopia has also violated one of the most significant principles in the declaration; it is the fifth principle that manages the filling and operation of the dam as:
1) It did not fulfill the recommendations of the international experts’ commission and did not respect the final outcome of the final report of the tripartite summit on the recommended studies.

2) It did not stick to the principle of cooperation on using the final outcome of the studies recommended by the reports of the tripartite summit, especially concerning the rules of filling and operating the dam.

3) It did not comply with the 15-month timeline stated by the international commission to implement these commitments, given that this timeline was set to end in 2017.

- Ethiopia did not adhere to the eighth principle on dam safety concerning the full implementation of the dam safety recommendations stated by the report of the international experts’ commission, as the country did not submit the required studies. The report of the committee confirmed that the dam studies lack the factor of safety and that they are not suitable for a dam of such massive size.

- Ethiopia dealt with the 10th principle on the peaceful settlement of disputes in unilateral and strange way, as it tried to remove any authorities for the mediators and limit its role to observing without being able to provide any suggestions or solutions. Ethiopia has also rejected at many times to refer disputes that emerged during negotiations to prime ministers of presidents of the three countries, which indicates Egypt’s desire to avoid any kind of accountability or review from any party after a final agreement is reached.

Despite the Ethiopian foreign minister’s remarks to AP, accusing some Egyptians of “longing for a war to break out,” Egypt has always affirmed its willing to resolve the matter peacefully.

Sisi on Wednesday urged the government to currently abide by the diplomatic path of negotiations, in an effort to solve the Grand Ethiopian Renaissance Dam crisis, the Presidency said. In a meeting with Prime Minister Mustafa Madbouli and a number of ministers, Sisi urged intensifying consultation with Sudan as well as member states of the United Nations Security Council in this regard.

This was not the first incident of its kind. In October last year, Egypt expressed its great shock and deep concern in response to Ethiopian Prime Minister Abiy Ahmed’s alleged remarks on GERD, as he warned that his country could ready millions of people in case a war broke out over the dam.

Ahmed, in a meeting with Sisi later, said his warning remarks, which grew tensions between the two states, were quoted out of context, the Egyptian Presidency said.

Sisi, during the meeting, said that while Egypt has always shown openness and understanding of the developmental interests of the Ethiopian state through establishing GERD, it sticks to its historical rights in the Nile water share.