Ethiopia evasiveness in the GERD crisis sheds light on how the successive Ethiopian regimes dealt with it based on nothing but own interests and goals. - Photo: Mohamed Zain/Egypt Today

CAIRO – 24 June 2020: Since the eruption of the Renaissance Dam crisis in 2011, it has become clear that the Ethiopian goals behind the launch of the dam go beyond the need to increase energy production, agricultural expansion or development for that matter, but to achieve broader political and strategic goals in its range by seeking to gain control over political interactions in the Nile Basin region, and serve the interests of its international and regional allies. Ethiopia evasiveness in this regard sheds light on how the successive Ethiopian regimes dealt with the dam crisis, and its reflection on the methods of managing the crisis, which goes back to 2011 until Ethiopia's withdrawal from negotiations in February 2020, a systematic line that mainly relies on ambiguity, prevarication, procrastination, and fait accompli.

Fearing political anger following the lock-up of several opposition leaders after the 2005 elections and clamp down on freedom of the press amid growing inequality and high unemployment, late Ethiopian prime minister Meles Zenawi had promised the plan to construct the Dam allows for the generation of six to eight thousand MW in the coming five-years. At the time, he said after completion, the Dam will be expected to hold 67 billion cubic meters of water, claiming this would “eradicate” poverty in Ethiopia, not to mention extensive opportunities for fisheries and cultivation. He further stoked aggressive feelings by presenting the project as a national dream, stirring up anti-Egypt sentiments, holding Cairo accountable for his country’s screaming failures and citizens’ poverty, and announcing the end of the “era of Egyptian control over the management of the Nile River.”

Zenawi also started marketing the project as a regional cross-border project, targeting the development of the Nile Basin at the level of water resources management and energy production, by increasing the efficiency of dams in Egypt and Sudan.

As intentions became clearer, the approximate filling capacity increased to 74 billion cubic meters without any engineering or economic justification, withholding information related to the dam's financing or impacts.

Zenawi then called to form a technical committee to study the feasibility of the project, known as the "tripartite committee", which included experts from Egypt, Sudan and Ethiopia, in addition to experts from England, France, Germany and South Africa. But that committee was only part of a plan for strategic deception, aimed at obtaining Egyptian initial approval for the dam's construction and without committing to suspend implementation until the committee finishes preparing its final report, not to mention that this committee had no right to issue binding decisions, as its opinion was advisory and non-binding for Ethiopia. 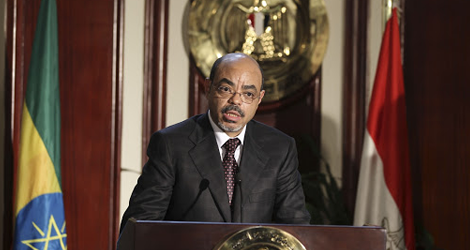 So, the technical committee's work spanned from six months to two years. Ethiopia has also benefited from its training in two things: to suggest the existence of some kind of prior notification and to inspire the international community that the project is being implemented in coordination with Egypt and Sudan.

In August 2012, the Ethiopian government was assigned to Hailemariam Desalegn, who affirmed that he was following in the footsteps of “Zenawi,” and that the construction of the dam was a strategic and irreversible option, as Ethiopia's hope for energy generation. Desalegn had sought to trick the world into thinking that the construction of the dam will be done in coordination with Egypt and Sudan as he met with Egyptian President Abdel Fattah El-Sisi in June 2014, and affirmed his country's commitment to international law, and not to harm Egypt's interests. He also participated in the economic conference in Sharm El-Sheikh, and allowed the Egyptian Minister of Irrigation to visit the dam site in September 2014, for the first time since the project was launched. He even signed the Declaration of principles in Khartoum in March 2015 that stipulated that three countries should cooperate to use the final findings in the studies recommended by the Tripartite National Technical Committee and international technical experts in order to reach:

a. An agreement on the guidelines for different scenarios of the first filling of the Grand Ethiopian Renaissance Dam reservoir in parallel with the construction of the dam.

b. An agreement on the guidelines and annual operation policies of the Renaissance Dam, which the owners can adjust from time to time.

- Accordingly the three countries are to establish a proper mechanism through their ministries of water and irrigation. Thus Desalegn’s success in eliciting an Egyptian written approval to construct the dam after it was facing the problem of non-recognition and illegality, he refused to provide Egypt with studies related to the Suddle Dam. He also opposed all Egyptian proposals to stop the dam, to modify its design, to resort to legal mechanisms for a settlement, or to allow the participation of the World Bank as a mediator during the negotiations.

In spite of this, Desalegn failed to employ the dam to prevent the outbreak of ethnic tensions in the country, especially by the Oromo and Amhara groups, which prompted him to arrest the opposition leaders and declare a state of emergency in the country, before the front forced him to resign in February 2018.

With the arrival of Abiy Ahmed to power in April 2018, the Ethiopian regime adopted a policy based on containing the problems inside and outside the country, to prepare to confront the national problem and achieve development. So Ethiopia agreed to the GERD outputs document in Khartoum in May 2018. He also announced in August 2018 that the completion of the dam might be behind schedule, to be opened in 2022, justifying the existence of technical errors in the design of the dam, and suspicions about facts of financial and administrative corruption.

Ethiopia was keen during the Washington negotiations not to commit to any standard or digital commitment during the negotiations, and it renounced recognition of the Egyptian water quota and water-sharing agreements in the Nile Basin, and did not commit to setting a time period for the first filling of the dam.

After all of this evasiveness and clear disrespect and inconsistency with international norms and laws, Ahmed closed the curtain on the negotiations by announcing his country's withdrawal from it in February 2020, accusing Egypt of spoiling the negotiations and adopting a sabotage scheme against Ethiopia. He also accused the United States and the World Bank of siding with Egypt at the expense of Ethiopia.


The interest of scholars regarding river sovereignty issues began early in the nineteenth century as theories ranged from one extreme to the other. At one end of the continuum was the doctrine of "absolute territorial sovereignty," according to which a state could do virtually as it pleased with the portion of an international watercourse within its territory-at least short of changing its course so it entered the downstream state at a different location-irrespective of the harmful consequences in the downstream state.

The doctrine of "absolute territorial sovereignty" is most often identified with an opinion prepared in 1895 by an Attorney General of the United States, Judson Harmon, in response to a request by the Department of State for advice concerning a dispute with Mexico over the use of waters of the Rio Grande.

Ethiopia's failure to sign the Washington GERD agreement affirms that it has been conducting negotiations since its launch in bad faith based on the outdated Harmon principle.

Despite the efforts exerted to return Ethiopia to the negotiating table, most data suggest that it will not return to negotiations before the general elections, which are expected to be postponed by Parliament due to the Coronavirus (COVID-19) crisis that forced the government to declare a state of emergency in the country for the next five months. However, it seems Ethiopia is taking other backdoor courses, for example;

- Ethiopia seeks to address foreign political circles and the global and regional public opinion to block Egypt’s diplomatic endeavors to find a fair and reasonable solution to the crisis.

- Ethiopia succeeded in pressuring Sudan and Somalia to object the Arab League’s decision to show solidarity with Egypt after Ethiopia withdrew from the negotiations, a decision that the Ethiopian Foreign Ministry described as “blind support by the Arab League to Egypt.”

- Ethiopia has been blatantly issuing aggressive statements in this regard, including a statement on March 12 by Ethiopian Chief-of-Staffs Lieutenant General Adam Mohamed Mahmoud that his army is ready to respond to any military attack targeting the Renaissance Dam, and respond equally to the source of the attacks.

- Also, the Nobel “Peace!!” Prize-winning prime minister Abiy Ahmed warned last October that if there's a need to go to war over a dam project disputed with Egypt his country could ready millions of people.

- Furthermore, without the slightest respect or consideration to any neighborly ties or international laws, Ethiopian Foreign Minister Gedu Andargachew announced on June 19, during an interview with The Associated Press, that his country will go ahead and start filling the $4.6 billion Grand Ethiopian Renaissance Dam next month, even without an agreement. Andargachew has even said, “We won’t ask for permission to carry out development projects on our own water resources,” which cannot be considered anything else but an affirmation that Ethiopia DOES NOT WANT TO REACH A PEACEFUL DEAL OR DIPLOMATIC SOLUTION TO THE PROBLEM!

- Ethiopia has also breached the treaty of May 1902, which Emperor Menelik II signed (and Abyssinia was not then a colony) with Britain (on behalf of Egypt and Sudan), claiming it was not ratified! This was in response to Egypt resorting to file a complaint against Ethiopia before the UN Security Council in May 2020, accusing Addis Ababa of violating international laws, peace and security. Ethiopia is urged to avoid taking unilateral measures without reaching an agreement with downstream countries on the rules of filling and operating the dam, according to Arab foreign ministers on June 24, as they noted that such a measure would be a clear violation of the Agreement on Declaration of Principles concluded between the three countries on March 23, 2015.